There is an old saying: “ a picture is worth a thousand words.” As a photographer, Heather Hughes understands this and works diligently with her clients to capture their personalities. At seven years old, Heather knew that photography was her niche. After getting her first camera, she began taking 4-H photos and continued working for the high school newspaper and yearbook, graduating with a degree in photography from Ohio University. 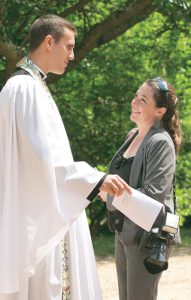 Living in Washington, D.C., she was one of the first photographers to capture photos during 9/11, and was there with her camera at the time of the D.C. sniper. She moved to the Virginia Peninsula in 2002, where she became a staff photographer for the Daily Press.

With her move to the Hampton Roads area, Hughes had the opportunity to photograph Hurricane Isabel. She was not new to the stress of dealing with traumatic events, having been raised in Ohio, where hurricanes are frequent. It was important to her to capture the story of how these events impacted people, as lifestyle photography and photojournalism were not prevalent in the town where she grew up.

During her time with the Daily Press, Heather began photographing weddings in her spare time. She realized that this brought her a joy she had not found being a staff photographer. Photographing weddings enabled her to capture memories that would live in the photo books of families for a lifetime. This inspiration prompted her in 2008 to open her photography business.

One of Hughes’ favorite wedding photo experiences was serving not only as photographer but also advisor to an appreciative bride and groom. “At the end of a 12-hour day as they were saying their goodbyes, the bride and groom gave me a hug and thanked me for everything to make their day perfect,” she says. “I had been more than a photographer to them, helping them plan their day, giving them advice on how much time to allot for hair and makeup and when to have their first dance. They said I was more like family than a vendor, and that meant the world to me.”

Being a wedding photographer allowed Hughes to take her photojournalistic style to the next level, expanding her reach from weddings to high school photos and photos of newborns. 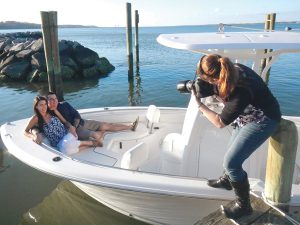 “I prefer capturing my subjects in their natural elements rather than following the rigid structure of only capturing headshots,” Hughes says. She enjoys photographing athletes playing their favorite sports, dancers in action and creating photographic stories. “While these moments were not necessarily newsworthy, these photos are just as, if not more, important to the people whose lives are being displayed in that single moment,” she adds.

In her spare time, Hughes likes being with her husband, Rob Ostermaier, and son William. She also enjoys traveling locally. Her work has allowed her to travel to the Outer Banks, the Eastern Shore and the Shenandoah Valley. She and her family often go camping, bringing a tent and enjoying the great outdoors while making their own memories.

Dealing with COVID-19 has been a challenge for Hughes as an entrepreneur, with limited capacity at weddings and health concerns stopping many people from scheduling events. Many of her clients are just visiting the area, often making client retention difficult. However, Hughes loves her work along with her ability to persevere even through challenging times.

With an office in City Center, Hughes meets with clients to show photo albums and products. She thrives on creating a great experience for them, offering new and different settings. With “a picture being worth a thousand words,” Hughes is ready to craft her own photographic story for her clients.