Jonathan P. Motley has been named executive vice president of TowneBank Mortgage, a division of TowneBank. He is the chief financial officer responsible for all accounting and finance functions at TowneBank Mortgage and its joint ventures. Motley has been a member of the Towne family since 2006, previously serving as a staff accountant and a treasury and financial analyst. He was also instrumental in consolidating company finances during the merger of Monarch Mortgage and TowneBank Mortgage in 2016. Motley is a Certified Public Accountant and a graduate of Virginia Tech, holding bachelor’s and master’s degrees in accounting. He is also a graduate of the Stonier Graduate School of Banking, an executive education offered by the American Bankers Association and the Wharton School at the University of Pennsylvania.

Edie Fischer and Kelli Caplan have joined Berkshire Hathaway Home Services Towne Realty as Realtors®. Fischer is owner of Hot Yoga and Massage Studio in Newport News and founder of the non-profit Llama and Alpaca Forever Foundation. Fischer, who lives in Franklin, is a Newport News native and is married to a Navy veteran. Caplan is a graduate of New York University and has worked for the Daily Press, Kidsville News and Oyster Pointer as a writer and editor. A native of St. Louis, Missouri, Caplan has lived in Newport News for more than 20 years. 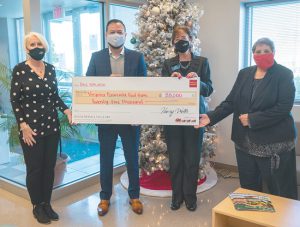 Riverside Doctors’ Hospital Williamsburg’s Elisa Mangosing-Lemmon, MSN, RN, CMSRN; Aaron Ross, RN; and Bonnie Workman, MSN, RN, CIC, nurses with Riverside Health System, have been recognized with 2020 Virginia Nurses Foundation Leadership Excellence Awards. Mangosing-Lemmon is a nurse educator “whose kindness and generosity extends to university students who have been hit especially hard by the ramifications of COVID-19,” according to her nomination. Ross was recognized for showing “compassion and skill by working with families when they are faced with separation from their loved ones on what may be the worst day of their lives,” according to his nomination. Workman, an infection prevention nurse manager, received an honorable mention award and “was instrumental in the development and implementation of innovative ideas that kept patients and the frontline team safe,” according to her nomination.” The Virginia Nurses Foundation focused on the contributions of 20 registered nurses throughout the state whose service was exceptional to their hospitals and communities during the pandemic.

Kathy Koehl and Tyler Sledge, pharmacy practitioners with Riverside Health System, have been honored by the Virginia Society of Health-System Pharmacists for their contributions to the profession. Koehl was named 2020 Pharmacist of the Year, and Sledge earned the 2020 Clinical Pharmacy Practice Achievement Award. Koehl has worked at Riverside for nearly 14 years, including the last five as system director for pharmacy clinical services. The award recognizes her leadership in the profession and her service to pharmacy programs within the Commonwealth. She earned her Doctor of Pharmacy degree from Virginia Commonwealth University in 2007. Sledge, clinical manager for pharmacy services, joined Riverside in 2017. Earning his Doctor of Pharmacy degree from Texas Tech University in 2011, Sledge spearheaded growth in Riverside’s clinical pharmacy team with a goal of providing quality clinical pharmacy services to patients. He initiated a review of a number of fundamental services and policies and expanded the medication reconciliation program in the emergency department. The Clinical Pharmacy Practice Achievement Award, which Sledge received, recognizes members who have made a recent contribution to the development of a patient-oriented pharmacy service that has a measurable or predictable effect on patient care outcomes.

Will Hoskins has become the 4th Rotarian to receive the esteemed Honorary Member recognition of the Rotary Club of Warwick at City Center. Joining Rotary in 1974, Hoskins was club president in 1979 – 80. As a result of his leadership, the club supported a GSE team visit to Japan, sent one of the club’s Rotarians to operate a dental clinic in Haiti and participated in several service projects with Virginia Living Museum. Hoskins joins fellow Honorary Members David Peebles, Raymond Suttle Sr. and Gordon Gentry. Hoskins is shown here with Sharon Martin, club president.

Club members supported the Salvation Army with bell ringing during the 2020 holiday season, along with adopting a family from the Salvation Army Angel Tree Program, for whom they made gift donations, bought gift cards, supplies, toys and clothing. Shown here are members volunteering in the Christmas warehouse, sorting and matching gifts for the Angel Tree program. 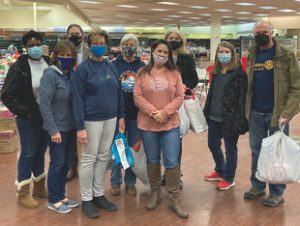 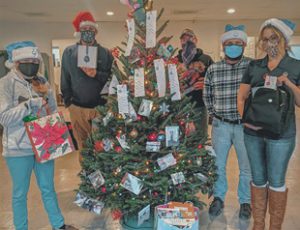 SOLitude Lake Management continued the company’s annual HOLiday Cheer tradition, aimed to bring joy to children and families facing challenges during December. SOLitude’s teams collected 382 presents and necessities valued at $4,440 to gift 103 children as part of the Salvation Army’s nationwide Angel Tree initiative. In light of the hardships caused by the COVID-19 pandemic, the SOLitude team was proud to support the organization, which had prepared to assist approximately 155 percent more families than years prior. In addition to Salvation Army contributions, SOLitude supported several children’s hospitals. There were 241 gift donations provided as part of SOLitude’s holiday social media campaign, which generated more than $2,800 toward the initiative. 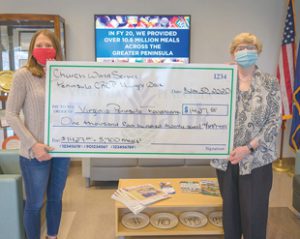 A check for $1,427 was presented to Tracy Hansbrough (left), Virgina Peninsula Foodbank, by Diane Walker, raised from the 25th Newport News/Peninsula CROP Walk held virtually in October. A check was also presented to Peninsula THRIVE for the same amount. 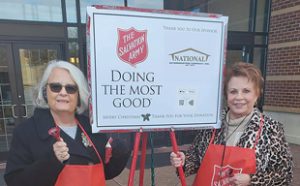 In December Katey O’Brien (left) and Sharyn Fox rang the Salvation Army bell for the Rotary Club of Newport News. The club has been supporting the organization for years with gift bag preparation and bell ringing, arranged by club member Athena Robbins. 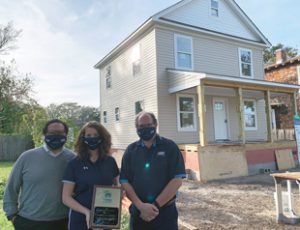 Lashonda Sanford, owner of Scratch Bakery, was a contestant on the Food Network’s Holiday Baking Championship. During her appearance, she was a judge’s favorite, taking home the most memorable dessert, her white macadamia nut cheesecake. She was also one of the top five finalists. Scratch Bakery has been operating in Port Warwick since 2011. It is known for its custom cakes, cupcakes, cookies and desserts.

Newport News Public Library (NNPL) received an Innovations Initiative Honorable Mention from the Urban Libraries Council (ULC). The annual Innovations Award competition recognizes and raises the visibility of cutting-edge programs, strategies, tools, techniques and ideas from ULC’s member library systems across the U.S. and Canada. NNPL was recognized for its new Mobile Wi-Fi program, created in response to the coronavirus pandemic as city facilities, including all library branches, were closed. Working safely from their cars, children and adults were able to complete school assignments, check email, apply for jobs or various benefits and more. The library provided more than 21 hours of service each week over three months to 180 connected devices, easing the stress of being disconnected until libraries were able to reopen. NNPL’s Mobile Wi-Fi Hotspot Program was selected by a panel of expert judges from 260 submissions in 10 categories that showcased creative thinking and imaginative applications of library resources.