Toru Nishizawa, president and chief executive officer with Canon Virginia, Inc. (CVI), retired in June after 41 years. Nishizawa began his career with Canon in 1980 upon graduation from the Tokyo Institute of Technology with a degree in management engineering. Since serving as president and CEO of CVI in April 2012, he spent the last nine years successfully transforming the company into the Regional Technical Headquarters for Canon U.S.A. Inc. During his tenure at CVI, he oversaw the addition of a new 900,000 square foot expansion of manufacturing, developed a R&D function and expanded into the aerospace and medical industry. Shingo Shigeta is successor and serves as president of CVI and Canon Environmental Technologies, Inc.

Anita Bloxom has joined The Lee Group as branch manager of its Newport News location, focusing on aligning clerical and industrial candidates with employers to create the best match for both. Prior to joining The Lee Group, Bloxom had a career with Target Stores that spanned two decades. For the last five years, she was an executive team leader for human resources.

After 20 years, John Cook, ChFC, retired from First Command Financial Planning in May. Captain (Retired) Cook joined First Command as an advisor in January 2001, after a 30-year career in the U.S. Coast Guard. He was instrumental in serving military, federal and civilian clients throughout Hampton Roads and multiple states. An active member of all of the local chambers of commerce, Cooke was singularly responsible for establishing a First Command office presence in Williamsburg. 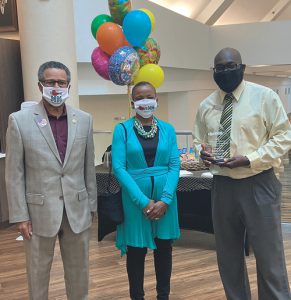 Edwin Tyler, (right) who works as a front-desk associate with the Holiday Inn Newport News/Hampton in City Center, was named “Gregory Cherry Tourism Professional of the Year by the Newport News Tourism. Newport News Mayor McKinley L. Price (left) and Vice Mayor Saundra Nelson Cherry presented the award to Tyler in a surprise announcement while Tyler was at work. The “Gregory Cherry Tourism Professional of the Year Award” is given annually during National Travel and Tourism Week to a hospitality industry employee who demonstrates superior customer service while also promoting travel and tourism in the city. It was named in memory of Gregory Cherry, a former travel counselor at the Newport News Visitor Center and owner of the James A. Fields House, who died in 2007.

Oscar N Alvarez of Pathway Divorce Solutions, Inc., is a Certified Divorce Financial Analyst® professional, having completed a program in divorce analysis offered by the Institute for Divorce Financial Analysts™(IDFA). Alvarez is trained to provide financial information and assistance to people going through a divorce. He evaluates the tax implications of dividing property and the financial impact of settlement options for dividing property (including pensions) and child and spousal support payments. IDFA trains financial planners, accountants and lawyers to determine the financial needs and outcomes for couples after divorce. 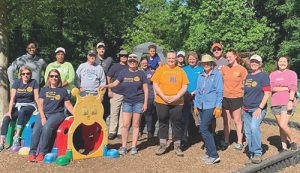 The Rotary Club of Warwick at City Center participated in a service project with Smart Beginnings by spreading mulch, planting flowers and laying gravel for the new outdoor learning environment at Resurrection Lutheran Church.

Langley for Families Foundation hosted its 7th Annual Charity Golf Classic at Golden Horseshoe Golf Club in Williamsburg in May and raised a record-breaking $389,000 in gross profits for local non-profits. A field of 120 golfers participated to raise funds and further the mission of the Foundation: to make a difference in the lives of children and families in all of the communities it serves. Net proceeds from the Charity Golf Classic will be granted to Hampton Roads non-profits in the areas of healthcare, housing and human services, education and safety and security.

Ed Smith and Steve Young have joined RE/MAX Peninsula. Newly licensed in Virginia, Smith sold real estate in Rhode Island. He has joined the Team Titan Real Estate. Smith served in the United States Air Force as a firefighter and paramedic. Young is a Hampton Roads native and a graduate of Regent University. Before earning his real estate license, he was in the Navy and worked in civil service.

More than 750 people entered the 2021 Newport News Tourism Awareness Contest, held in May to celebrate National Travel and Tourism Week. This year’s contest highlighted outdoor activities and places around the city where these activities take place. To enter, contestants needed to match the correct clue box number to the corresponding fun outdoor activity found in Newport News. All correct entries were then entered into a drawing to randomly select the winners of six prize packages, each valued at more than $600. The six random winners included Rachelle Moody, Claire Scott, Tracey Shands, Candace Sillaro and Lexi Willis, all of Newport News and Nicole Shepherd of Hampton. Prizes ranged from restaurant and shopping gift cards to overnight stays at local hotels.

Melinda S. Hancock, CPA, FHFMA will join Sentara Healthcare as senior vice president and chief administrative officer on July 19. As chief administrative officer, Hancock will lead a number of Sentara teams including internal audit, compliance, legal services and privacy. She will also oversee supply chain, enterprise analytics, strategy and mergers and affiliations. This is a newly created position at Sentara Healthcare and she will report to Howard P. Kern, president and CEO.

Former Virginia Secretary of Finance Aubrey Lee Layne, Jr. has joined Sentara Healthcare as senior vice president and chief of staff. Layne will oversee a number of Sentara teams including legislative affairs, corporate social responsibility, the Sentara Foundation – Hampton Roads, real estate, construction, marketing and communications and the Sentara College of Health Sciences. Layne will also report to Kern. Layne, a Certified Public Accountant by trade, was appointed by Governor Ralph S. Northam to his former role as Secretary of Finance for the Commonwealth of Virginia in 2018.

Kathy Nadeau has joined RE/MAX Peninsula. Licensed in 2017 after working in business, finance and marketing, she is working in residential sales with the realty company.