Virginia Health Services (VHS) is using its in-house resources to manage COVID-19 to keep its communities safe. The Virginia Health Services Pharmacy became one of the first long-term care pharmacies in the Commonwealth to provide an ongoing supply of COVID-19 vaccine for its residents and team members. All new VHS residents and team members will have access to the vaccine through the affiliated pharmacy. VHS worked with the Virginia Department of Health’s Long-Term Care Task Force and collaborated with pharmaceutical companies and other health care providers to ensure access to life-saving supplies and treatments for its communities throughout the pandemic. Mark Klyczek is VHS president and CEO.

Newport News Sheriff Gabe A. Morgan, Sr. has been elected chair of the Riverside Health System Board of Directors. Morgan joined the board in February of 2017. He will fill the role of Alan S. Witt, who served as board chair for the past 16 years.

Eric J. Simko, MD, FACS, FAAOA, of Tidewater Physicians Multispecialty Group (TPMG) Otolaryngology/Head & Neck Surgery/Allergy, has been awarded a Certificate of Appreciation for his 20 years of academic service to Eastern Virginia Medical School (EVMS) in Norfolk. EVMS recognizes those who make a difference in their communities through their service. Community Faculty milestone recipients are honored with a Certificate of Appreciation and an invitation to scheduled Community Faculty Appreciation events. Dr. Simko served as an EVMS clinical assistant professor in otolaryngology for 20 years, He continues to practice as a board certified otolaryngologist in Newport News. He was the first otolaryngologist to join TPMG and has remained with the group since 2010. 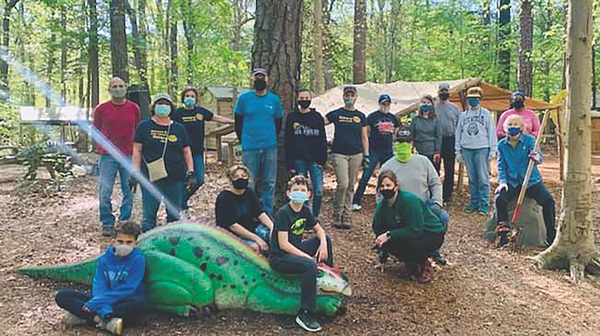 Rotarians from the Warwick at City Center Rotary Club celebrated Earth Day 2021 by spreading mulch and cleaning up the Dinosaur Discovery Trail at Virginia Living Museum. Opened in 2016, the walking exhibit showcases 16 of the majestic animals that ruled the earth more than 150 million years ago, including a T-Rex and a Brachiosaurus. 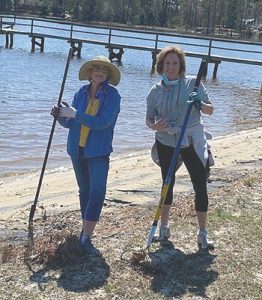 Rotarians spent an afternoon at the Northern Neck YMCA Camp Kekoka helping to clean and tidy the facilities for this season’s campers. Founded in 1946, the 97-acre camp is located in Kilmarnock and has something for all ages. 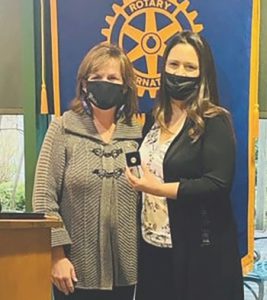 Sharon Martin, club president, was recognized as a Paul Harris Fellow+2 at a recent club meeting. Jennifer Daknis, past president, presented Martin with a recognition pin, and Carol Chamberlain, foundation chair, via zoom, recognized Martin’s contributions to the club. The Paul Harris Fellow was established in 1957 to encourage and show appreciation for substantial contributions to the Rotary Foundation. 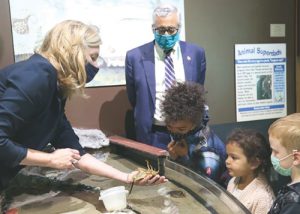 In the spirit of Earth Day, the Virginia Living Museum (VLM) welcomed Congressman Bobby Scott, for a VIP Environmental Tour of the campus. Congressman Scott toured areas focused on environmental exhibits, including the Goodson Living Green House, Holt Native Plant Conservatory, Floating Wetland, and the Coastal Plain touch tank where he joined families to learn about whelk, hermit crabs, and how horseshoe crabs may have helped conquer COVID-19. Congressman Scott is shown at the touch tank with Rebecca Kleinhample, VLM executive director and children visitors.

Brian K. Skinner has been promoted to president and chief executive officer of Towne Financial Services Group (TFSG). TFSG contains all the non-bank divisions of the company, including mortgage, insurance, realty and wealth management. Currently, Skinner serves as chief banking officer with the leaders of the many non-bank lines of business also reporting directly to him. In this new position, he will be able to devote attention to these businesses, which are the fastest growing segment of the company. Skinner has been with Towne since 2007 and previously served as president of TowneBank for the Peninsula. 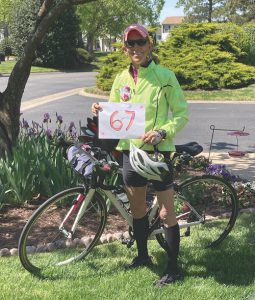 Rona Altschuler, volunteer and advocate for the Walk to End Alzheimer’s in Newport News, completed a 67-mile bike ride in honor of her 67th birthday on April 23. Altschuler declared this was her way to give back to an important cause and to honor the memory of her mother, who died of Alzheimer’s in 2011.

Peninsula Regional Animal Shelter (PRAS) has been awarded a $30,000 grant investment from the newly named Petco Love to support its lifesaving work for animals in the Hampton Roads area. The grant will help PRAS continue to offer educational opportunities and programs through outreach to the communities on the Virginia Peninsula. Petco Love’s investment will allow the shelter to further its goals and commitment to use new and innovative lifesaving opportunities and programs to bring an awareness of the challenges that exist in our communities associated with lost, stray and community animals. Since 2015, PRAS has averaged an intake of 6,200 animals a year, and in 2020 the organization reached an 89.75 percent life-saving percentage for dogs. This success was partly credited to a robust foster care program that served more than 1,000 animals. In the past four years, Peninsula Regional Animal Shelter has raised its overall life-saving rate to 84 percent, an increase of more than 20 percent. Roger Iles is shelter manager.

Jordan D. Moody, a senior at Woodside High School and student representative to the Newport News School Board, is the recipient of the $10,000 Wayne D. Lett Scholarship awarded by Newport News Education Foundation (NNEF). Moody, who is active in other extracurricular activities, including chair of the Superintendent’s Advisory Group on Education and member of the Mayor’s Youth Commission, plans to attend Norfolk State University on a scholarship to pursue his dream of becoming a teacher. This NNEF scholarship program is a merit-based award given over four years to a Newport News public school senior who plans to become a public school teacher and is administered as a tribute to Wayne D. Lett, Ed.D., a former superintendent of Newport News Public Schools. The recipient must commit to teach in Newport News for three consecutive years after graduation.

Eugene M. Jordan, II, will transition into the new role of general counsel and corporate secretary for Old Point Financial Corporation. Jordan has served as president and CEO of Old Point Trust for the past 19 years and as chairman of the Old Point Trust board of directors for the past two and a half years. Jordan holds a bachelor’s degree from North Carolina Wesleyan College and a Juris Doctor degree from Campbell University. He has more than 30 years of law experience, 14 of which from before he joined Old Point.

Eric C. Darby, MC, FACS, board certified urologist, and the team at Tidewater Physicians Multispecialty Group (TPMG) Urology have been designated as an Axonics Center of Excellence by Axonics Modulation Technologies, Inc. This designation recognizes the TPMG Urology team and specifically Dr. Darby for his expertise with Axonics Therapy and commitment to changing the lives of patients suffering from overactive bladder, fecal incontinence and urinary retention. The Axonics Center of Excellence program recognizes highly trained and experienced physicians (typically urologists, urogynecologists, and colorectal surgeons) and clinical practices that are committed to patient education and providing exemplary care to achieve optimal clinical outcomes and patient satisfaction.

The Newport News Sheriff’s Office will hold its annual Shred Day on Saturday, June 26 from 8 a.m. to 11 a.m. at Todd Stadium, located at 12465 Warwick Boulevard. This annual free service is offered to help individuals and families protect themselves from identity theft. Businesses are excluded from this service. Paper bags and boxes are requested for papers (no plastic bags). Learn about the kinds of papers that need to be destroyed and other timely information on the Sheriff’s office website, nnsheriff.org.