The Newport News Master Gardeners Association is offering School Horticulture Grants to support learning this school year. These grants are intended to foster and support the development of student-based projects that increase understanding and appreciation of plants and gardening in the local ecosystem and promote environmental stewardship. Educators and support staff of Newport News youth in all grade levels are encouraged to develop creative and fun projects that are student centered and hands-on. Grants may be funded up to $500. Applications may be submitted electronically or via mail and are due by November 15. Grant awards will be announced in December, with funding available in January 2023.

Dian T. Calderone, MTX, CPA has been awarded the Excellence in Governance Award by the Virginia Hospital and Healthcare Association, recognizing her service on the governing body of a member health system. She has a history of making significant contributions to healthcare, on the state and local level, through service and leadership. Calderone recently completed a four-year term as chair of the Sentara Health System board of directors. She is president of Calderone Abbott PC, Certified Public Accountants. 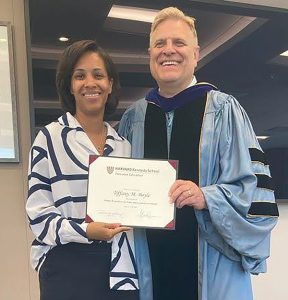 Following her receipt of The Cahn Public Service Fellowship, Tiffany Boyle, Newport News Commissioner of Revenue and founding member of Virginia’s first state-wide Minority Business Commission, has completed the Senior Executives in State and Local Government Program, offered by Harvard University. Through the John F. Kennedy School of Government, the program is intended to enhance the acumen of senior-level executives working at state and local government levels. The Cahn Public Service Fellowship is offered to applicants already serving in elected positions and those in non-elected positions aspiring to hold a higher seat in political office. Shown here presenting the award to Boyle is David King, faculty chair at Harvard University. 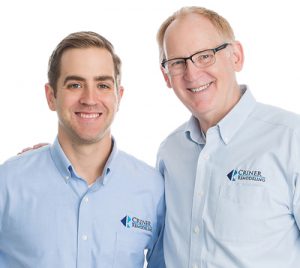 Criner Remodeling, a Newport News-based and an award-winning home remodeling company that has served the Virginia Peninsula since 1977, is celebrating 45 years in business this year. Over the last four and a half decades, the company has helped hundreds of homeowners throughout the area adapt their homes to meet their changing needs. Shown here are Robert Criner, president and owner, and Robert’s son, Paul Criner, who has taken the lead and manages the company’s day-to-day operations. The company’s commitment to quality workmanship and service has earned numerous local and national awards, including the National Association of Home Builders, the National Remodeler of the Year Award, the National Remodeling Quality Award, the Peninsula Housing and Builders Association’s Builder of the Year Award, Qualified Remodeler Magazine’s Master Design Gold Award and numerous Peninsula Remodelers Council Showcase Awards.

@Skyn Stuff Esthetics has opened a spa at 729 Thimble Shoals Boulevard, Suite 3-B, specializing in healthy skin, its maintenance and total body relaxation. The services offered include facials, chemical peels, micro-dermaplaning and thermolysis. Owner Tyvonna Sears, a Newport News native, is a Master Esthetician and has worked with Mary K, MAC Cosmetics and Massage Envy.