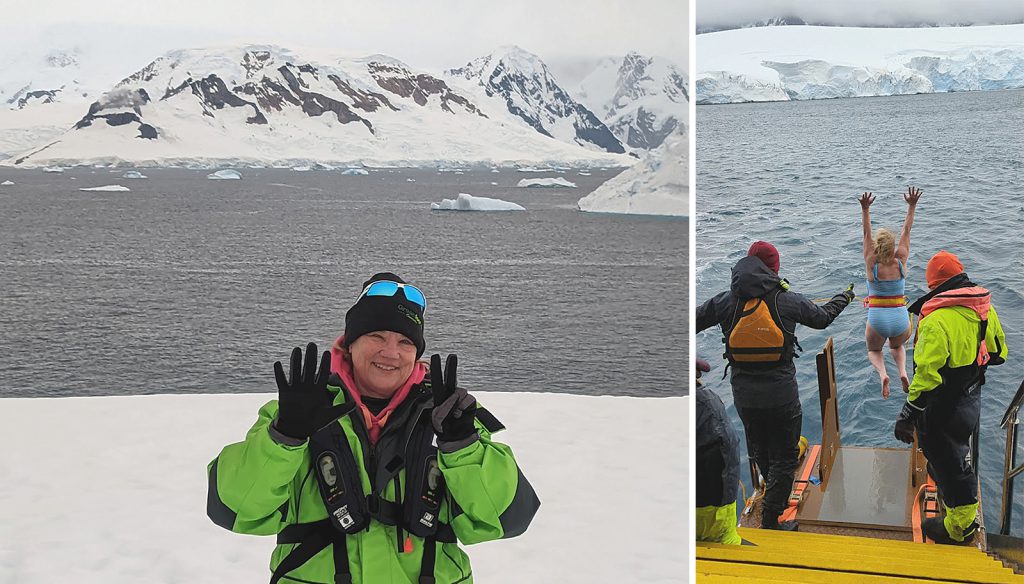 My anticipation began mounting the moment I confirmed my reservations to Antarctica. In February, I would be fulfilling my dream of setting foot on my seventh continent.

Most of the vast area remains untouched and all of it remains untamed. Antarctica is the coldest, driest, windiest and highest continent. The summer season, which is the only time you can visit, runs November to March, with temperatures averaging around 32 degrees. It takes more time and money to get there than many other places, but everything worthwhile requires some sacrifice, right?

The first leg of the journey was to Ushuaia, Argentina, known as the “End of the World.” The flight is more than 12 hours, so I recommend business class or breaking the trip with several days in Buenos Aires before Ushuaia. Argentina requires a phalanx of paperwork to enter the country — at the time, a negative COVID-19 PCR test, proof of vaccination, bewildering digital documentation and travel insurance that specifically covers COVID-19.

Next, I boarded the luxury expedition ship that would be my home for the next nine days. But I still wasn’t there. First, you must survive the infamous Drake Passage, the powerful convergence of the Atlantic and Pacific Oceans at the tip of South America. The two-day crossing is notoriously experienced as either the “Drake Lake” or the “Drake Shake.” I’ll just say we were rockin’ and rollin’. I didn’t experience any discomfort, but Dramamine, acupressure bands and ginger are recommended to ward off any queasiness.

On an Antarctic expedition, there is a generally planned itinerary, but the exact sites for landing or zodiac expeditions remain “Captain’s Choice.” Weather conditions change rapidly, and explorers must remain flexible. One day the seas and ice would not cooperate, so we could not launch zodiacs from the ship at all. But at the sites we did go ashore, It. Was. Magical.

At Portal Point, crabeater seals met our zodiac with indifference as they lounged on the rocks at water’s edge, and I officially set foot on the southernmost continent, checking off that bucket list item. Hiking up a domed rise afforded an incredible view of our ship far below, floating in the bay among icebergs, bergy bits (ice under 15 feet) and growlers (smaller “ice cubes” of the Antarctic). Jagged mountain peaks drew a line against the blue-gray sky. Between the mountains, ancient glaciers flowed, moving to the sea.

On Danco Island, Gentoo penguins waddled along from their rookery to the water. When they arrived, they flew across the water in dolphin-like leaps. At Cuverville Island, I climbed a glacier and slid all the way down on my bottom (on purpose)! The crew was excited to stop at Petermann Island, a site where many had never successfully landed, so it was very special. It’s also the home of the largest Gentoo penguin colony in Antarctica. There were thousands of them!

Once back on the ship, our expedition leader announced that the time had come for one more once-in-a-lifetime event — the Polar Plunge! Yes, I willingly jumped off the ship’s zodiac dock into the Antarctic’s 28 degree Fahrenheit water (with a retrieval rope around my waist in case of shock). Another checkmark, and no, I don’t feel I ever need to do that again.

It’s difficult to convey the grandeur of the landscape and the wonder of seeing the wildlife in its natural habitats. I made sure to sit quietly, to watch, listen and soak in the vastness. In all ways, an expedition to Antarctica is a trip of a lifetime. If you also crave going beyond the end of the world, be sure to get advice from your favorite travel advisor.

About Beverly McLean 18 Articles
Beverly McLean, CTC, is affiliated with Covington Travel and can be reached at 757-286-5233 or e-mail BeverlyM@covtrav.com.