The employees at Commonwealth Epoxy Coatings don’t have normal nine to five schedules.

When everyone else goes to bed, or goes on Christmas vacation, that’s when they come in, working quickly and efficiently to protect the floors and walls of some of the most important buildings in our lives, from surgery floors to nuclear refueling facilities.

As owner of the coating company, whose office is located at City Center in Oyster Point, Clay Amott says his employees are often behind the scenes. 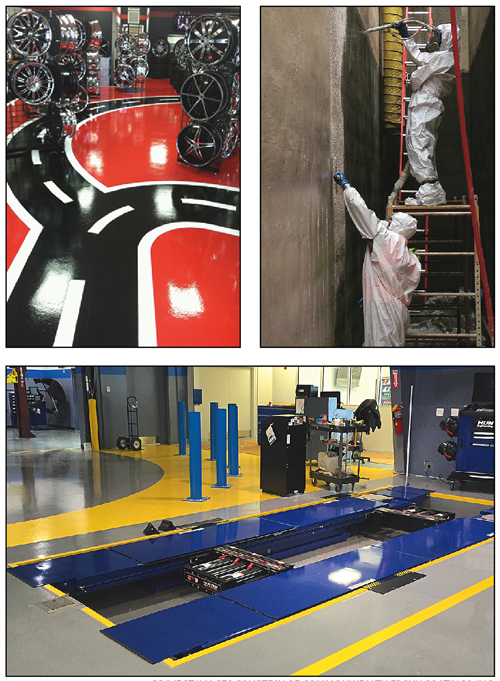 “Most of our work activity is not seen by many people,” he says. “It’s functional.”

Commonwealth Epoxy Coatings, Inc. uses epoxy to coat concrete floors and protect against everything from food spills to chemical spills.

Other services provided include waterproofing, structural concrete repair and restoration as well as manhole rehabilitation.

Amott says a typical project involves four to eight employees, who take over the space while it’s not in use—at night or during holidays—and projects can take a week to six months to complete, depending on the square footage of the space.

Amott has clients around the country, many of whom are repeat customers. His company has completed projects for animal shelters, commercial kitchens, classrooms, Newport News Shipbuilding, Virginia Commonwealth University and several military bases, to name a few.

He says about 50 percent of his business comes from general contracting, while the other half comes from private industry, the federal government and other developers.

Commonwealth Epoxy Coatings has four project managers and estimators—Amott is one of them—who the client works with through the duration of the project, which Amott says is the key to building relationships and getting repeat clients.

“Our customers see the same faces from project to project, from year to year,” he says. “It gives them a comfort.”

Amott, who grew up in Hampton Roads, took over the coating business 16 years ago and has grown it from fewer than 10 employees to around 40.

“Our position is to help people,” he says. “They come to us with problems, and we try to solve their problems.”

Amott says owning his own business is a “tremendous challenge,” but one he enjoys taking on every day. When he’s not managing the business, he likes to spend time with his three daughters and go boating.

About Marie Albiges 8 Articles
Marie Albiges is a freelance journalist, covering local government, business, economic development and health. She is a 2014 graduate of Christopher Newport University, where she served as news editor of the Captain’s Log, the weekly student-run newspaper. She likes to write stories that start social, cultural and meaningful conversations. She has been writing for the Oyster Pointer since 2012.