Chef Charles Delargy ticks down a list of tasks for the day.

Cut the meat. Prep the stations. Get ready to cook.

Delargy is program director at the Culinary Institute of Virginia in Oyster Point. Clad in a white chef’s jacket, he is teaching a class of eager students who are working toward a degree in culinary arts. He is in a kitchen that looks like it could have come out of any major restaurant. And he and the students are focused and ready to create.

Windows that look out onto the streets of City Center surround the Institute’s location. People look in, hoping to catch a glimpse of the cooking magic. Cooking is hot right now, and with the help of Food Network and the Cooking Channel, it’s become popular to watch the cooking process.

“We really love this,” Delargy says of the kitchen and the interface the windows allow with the public. “It’s great.”

“The idea is that it is an accelerated program with no breaks,” says Kim Hicks, campus director. “Our students want to begin working.”

The student body at the Oyster Point campus is diverse. There are students of all ages, some right out of high school and some who are career changers, people who have come into culinary arts late. No matter how they arrived, all are on a mission: to work in food service.

“The industry has changed. It’s not necessarily what it used to be. But it’s exciting,” Hicks says. “There is a misconception that if students go to culinary school, they only want to work in a five-star restaurant. Any place there is food, there is someone in the back doing it. That’s the beauty of it. The industry is huge. There are so many different options,” she says. “We try to open our students’ eyes and expose them to all of it.”

Last year, the school had an 85 percent placement rate for its students. Students find work in many venues, including restaurants, nursing homes and hospitals, resorts, corporate facilities and schools. One of its largest recruiters is Disney. The possibilities of what students can do with their degree are endless, Hicks says.

“We work very hard to achieve that rate,” she says. “Students are employed in their field within six months.”

To get into the school, students need a high school diploma, and they must apply and go through the admissions process. All students must complete five general education classes during their training: English, math, communications, psychology and humanities. Three shifts of classes a day accommodate students’ schedules.

Students learn both in the classroom and in the kitchen. The school has two kitchens, one of which is commercial. There are pantries stocked with ingredients and menus from restaurants around the country lining the hallways to give students inspiration.

There is also a dining room that looks just like a restaurant. This is where students learn the front-end service of a restaurant. It is equipped with a full bar so they can also practice mixing drinks. It looks like a real bar, but all liquor has been replaced with blue water.

“It is a classroom in disguise,” Hicks says. “This is where students learn to run a restaurant.

“This is as close to the real thing as we can get,” she says.

Instructors are all accomplished in their fields and are excited to be passing their knowledge on to the next generation of chefs.

It is most rewarding to watch the culinary students come in as novices and advance their skills during their classes, Hicks says. They tend to love what they are doing, and gain confidence in the kitchen quickly.

“It’s fun to see students evolve in 15 months, seeing their confidence and skills grow,” Hicks says. “It’s a fun journey to travel with them.” 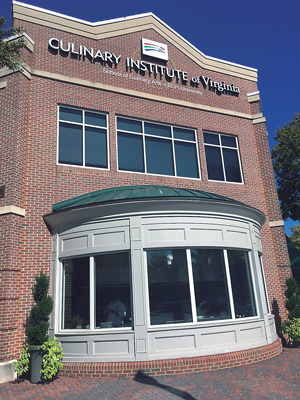 The Culinary Institute of Virginia also offers cooking classes for the community. The classes range in topic from international cuisine to cake decorating. To register, go to casualgourmet.com.

About Kelli Caplan 71 Articles
Kelli Caplan is mother of three children and a friend to all who know her. She use to spend a lot of time in her SUV, driving to schools and pediatricians, but her children have graduated from high schools. Now she can be found at WalMart and Harris Teeter, playing pickleball or cycling. She loves to try new recipes and new authors’ books. Her favorite foods are green (lettuce, broccoli, pickles). A former crime reporter for the Daily Press, Kelli has been writing for Oyster Pointer as long as she has been able to hold a pencil.