Stars from Heritage and Achievable Dream high schools ran their way to a state title in the 4 x 200 meter relay during the indoor track state competition.

Shirelle Linzy (An Achievable Dream HS student), JahNiyah Thomas, Angela Tubman and Jhala Williams (Heritage HS students) led from start to finish winning in 1:47.08. These athletes are not only individual standouts, but together, they are state 4A champions.

Morgan Merritt of Menchville High School was named the Virginia High School League Group 5 Field Hockey State Player of the Year. Merritt finished her four-year varsity career with 95 goals and 54 assists. She tallied 36 goals and 22 assists this season, breaking career school marks in both categories and for total points.

Merritt was also named the 1st team All-State Group 5 mid fielder, earning the region and district title as well. She was also voted Daily Press Player of the Year, and the National Field Hockey Coaches Association Player of the Month for September, October and November. 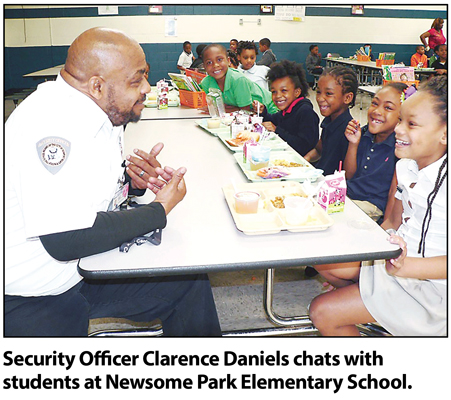 As the unofficial post office motto goes, “Neither snow nor rain nor heat nor gloom of night stays these couriers from the swift completion of their appointed rounds,” the same can be said for Newsome Park Elementary School Security Officer Clarence Daniels, who is outside every day regardless of weather conditions, to ensure students safely cross the street to and from school each and every day.

The Virginia Department of Transportation and the Safe Routes to School Program recognized Daniels as one of the Commonwealth’s Most Outstanding Crossing Guards on Crossing Guard Appreciation Day. Officer Daniels was nominated for the award by students, parents, staff and the local Safe Routes to School Coordinator, who wrote, “Mr. Daniels has been a very devoted crossing guard. He is at his post bright and early, ready to greet students and parents as they arrive to school in the morning. He is ever vigilant, watching for careless motorists and unsafe situations that surround the school.”

Newsome Park Principal Oriel Robinson-Taylor said, “Officer Daniels is a true example of the ‘heartwork’ that makes our school, community and district shine. He has a unique and long-standing connection with our families and works every day to build lasting relationships in and beyond our school community.”