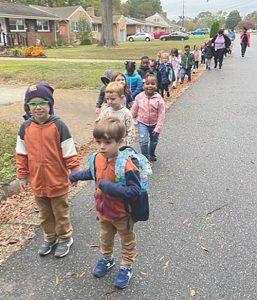 During a walk in the neighborhood around their school, students looked for real-world examples and excitedly pointed out chimneys, bricks and upper floors of the houses and other structures they saw.

Back in their classrooms, the students practiced speaking in front of the group as they shared pictures and debriefed about all they had seen.

In October, teams from the eight middle schools in Newport News Public Schools sprinted from the starting line at Todd Stadium at the NNPS All-City Track Meet.

When scores were combined for all events, the top performers were the Booker T. Washington Middle School girls and the Gildersleeve Middle School boys.

The Governor’s STEM Academy magnet program at Heritage High School celebrated the grand opening of its Esports Lab, a room designed to give the school’s Esports team the resources to compete successfully with other teams across the country and around the world.

The lab features monitors, gaming computers and consoles, a flat screen display, a glass whiteboard and a rug and special seating where the team can strategize. From the facilitator’s desk, the team’s coach, Macario Castro. is able to observe the action. Special acoustic tiles over the gamers’ desks absorb sound, and the room incorporates Heritage High School’s colors.

The students visited Esports labs at Old Dominion University and ECPI to learn how team play can continue after graduation. A number of colleges offer Esports teams and scholarships, and the skills successful players develop can translate into real-world careers.

The Heritage Esports team competes in several games, including Splatoon, Hearthstone, Mario Kart, Super Smash Brothers and League of Legends, ranking respectably in a region that includes about 200 schools along the East Coast.