Some artists create their masterpieces on canvas. Karen Freidt is not one of them. Her canvas is pie. Yes, pie.

Freidt has quickly discovered that her talent is bakeable. And the world is on to her sweet skill.

Freidt retired from NASA last November after 33 years, having worked her way up from graphic artist to creativity guru at the center’s Navigation Center for Creativity and Innovation. She was ready to try her hand at something different. She looked forward to working on art, her love of stand-up comedy and anything else that would bring her joy.

Then, COVID hit. At about the same time, Freidt became ill. She tested negative for coronavirus, but ended up with pneumonia. After three rounds of antibiotics, she started to feel better in April.

“I needed something to cheer me up,” she said. 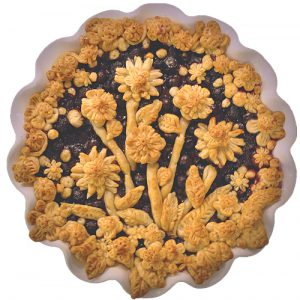 So, she decided to make a blueberry pie. Her husband, Wade Mickley, loves blueberry pie. She had made him a couple in the past, but was not an expert by any stretch.

On this particular morning, Freidt, who is also a sculptor, decided that making a pie would be uplifting. She began baking, realized how much fun she was having and began to play with the dough. It came out beautifully, and that was the beginning of what has been a wild whirlwind of media attention and newfound fame.

As Freidt, who has a Bachelor of Fine Arts degree from Longwood University, continued her blueberry pie baking streak, her designs became more intricate. She would lose herself in the designs, working for hours cutting and shaping the dough.

Freidt, 58, was so thrilled with one of the pies that she posted a picture of it on Facebook. And then, something amazing happened; her pie went viral, with 20,000 people liking it.

“The notification thing just kept spinning,” she says. “I thought, ‘what the heck.’”

One social media post led to another, and quickly the eyes of fashion designer Anna Sui were ogling Freidt’s creation. Sui was working on a clothing collection called “Heartland” and was looking for the perfect prop to ignite the feeling of comfort and home during a time of such unrest and fear. She thought Freidt’s pie would do just that.

Sui contacted Freidt and said she wanted two pies for her show.

Freidt was thrilled, shocked and humbled. She started working her edible magic. It took 15 hours to make the pies. Her daughter, Rachel, delivered the pies to Sui’s office in Manhattan. When Rachel arrived, she noticed that Sui had pictures of three of her mother’s pies on her inspiration board.

“The pies were the inspiration for her clothing line,”Freidt says.

Rachel asked Sui how she found out about her mother’s creations. Turns out that somehow Theodora Richards, daughter of Rolling Stones member Keith Richards, was reposting pictures of the pies and that’s where she discovered them.

The pies were the hit of the show, and during one part, the fashion models ate the pie on film.

“They said it looked great and tasted great,” Freidt said.

The fashion shoot catapulted Freidt’s pies all over the world. She has received compliments from around the globe. Freidt, however, is modest, saying that she was just doing what she loves: art.

“I don’t feel like I deserve anything. I just wanted to play,” she says. “I feel kind of like this is an out-of-body experience. It doesn’t feel real.”

People want to order these pies, but Freidt is not quite ready to get into the pie-shipping business. She does not have a commercial license and is not sure that is the direction in which she wants to go.

Instead, Freidt who grew up in Newport News and graduated from Menchville High School, has used her talent and fame to help her hometown community. She decided to donate a pie to the Foodbank of the Virginia Peninsula for a raffle. The raffle raised $5,001, which translates into providing 20,004 meals. She is as proud of that as she is of her fame.

Freidt, who recently added color to her pie art portfolio, says she is exploring different pie-related options. Next year, she wants to design a pie book with photographs of all things possible in the pie world.

Whatever the future holds, Freidt is having fun with it, and enjoying her newfound passion for edible art. People are hungry for her masterpieces.

“I love spreading love and beauty,” she says.

About Kelli Caplan 72 Articles
Kelli Caplan is mother of three children and a friend to all who know her. She use to spend a lot of time in her SUV, driving to schools and pediatricians, but her children have graduated from high schools. Now she can be found at WalMart and Harris Teeter, playing pickleball or cycling. She loves to try new recipes and new authors’ books. Her favorite foods are green (lettuce, broccoli, pickles). A former crime reporter for the Daily Press, Kelli has been writing for Oyster Pointer as long as she has been able to hold a pencil.