We watched excitedly as the creaky, old streetcar ambled down the track, sparks flying from the overhead boom as it contacted the power line above.

The streetcar was returning from Newport News on its way to downtown Hampton, then on to Buckroe Beach. It traveled down Electric Avenue (now Victoria Boulevard) to Armistead Avenue and into downtown by way of Queen Street. 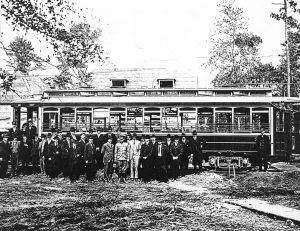 We stood at the corner of Electric and Hampton Roads avenues. Here, we had placed four pennies on the track and waited patiently for the weight of the streetcar to convert our pennies to silver-dollar-sized coins that would amaze and impress our friends.

I loved riding Hampton’s streetcars and would often wait for an hour to board one at Hampton Roads Avenue en route to my grandmother’s house in downtown Hampton.

I would climb the three steps onto the car and drop a nickel into the glass coin slot, watching with fascination as the coin negotiated the chute down to the coin box.

With little patience at my lingering at the door of the streetcar, the conductor would snap, “Need a transfer?” suggesting I might want to later change cars for the Buckroe Beach route.

Not requiring a transfer, I would take my seat on one of the wood-slatted benches as the car jerked into motion.

The streetcar would travel only a few blocks to Algonquin Avenue before turning into what locals referred to as “The Car Barn.” This was the maintenance and storage area for streetcars.

Here, for some reason I never understood, the streetcar would come to a stop, and at the command of the conductor, all passengers would stand, unlatch their seat and flip them over so that the seats were now facing the rear of the car.

Once this was done, passengers would once again take their seats, and the conductor would use controls at the opposite end of the car and, reversing direction, would return to the Electric Avenue track.

The streetcar traveled at a peak speed of about 25 mph as it stopped often. In summer, I, like many others, loved sitting by the open window, listening to the click-click sound of the steel wheels passing over the joints in the track. I especially looked forward to the conductor ringing the brass bell when crossing intersections or to warn a pedestrian crossing in front of the car.

As the car approached a stop, passengers would pull an overhead cable, signaling the conductor to stop at the next corner. The conductor knew passengers who traveled frequently and he would stop without notice at the required stop.

Aware of my recurring trips to my grandmother’s house, the regular conductor would not only anticipate my destination but would stop in front of her house on Armistead Avenue and wave to my grandmother as she sat on the porch, awaiting my arrival.

I never questioned whether this was authorized, but no one complained.

These are long lost days of yesterday but are such happy memories of Old Hampton.

Charles (Buddy) Alligood, a retired industrial engineer, enjoys hiking and working in his garden. He lives in Greensboro, NC, can be reached by email at budlite61@gmail.com.