Travel is back and away we went!

In June, I escorted a group of Warwick Travelers on a 7-night Rhine River Cruise from Amsterdam, the Netherlands, to Basel, Switzerland, where we disembarked our vessel, boarded a train through the Swiss Alps and spent three nights in Milan, Italy. It was a long overdue travel adventure.

Amsterdam is a city of canals and houseboats, where the bicycle is king. One must be on guard when crossing a street or standing on a corner, as the bicycle has the right of way. You will find a mecca of art museums to visit as well as the Anne Frank House. We enjoyed a canal boat ride followed by a guided tour of the Rijksmuseum, where we viewed the famous 1642 painting, The Night Watch, by Rembrandt.

The Rhine River is famous for fairy-tale castles and picturesque landscapes of valleys dotted with medieval villages. Dutch delicacies of herring, cheeses and stroopwafels were enjoyed, as well as German beer and Alsatian cuisine. 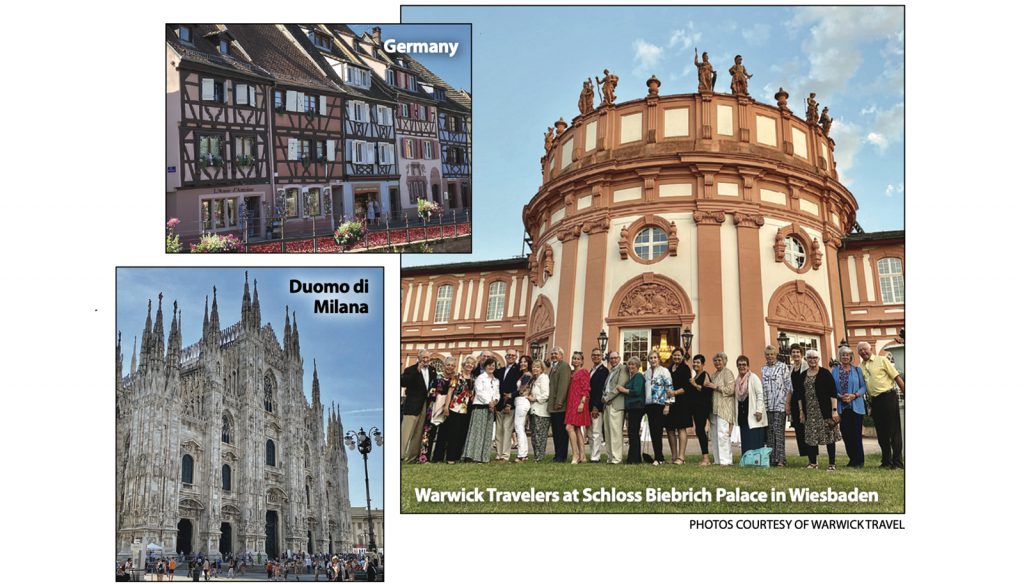 As we cruised the Rhine, our first stop was Dusseldorf, where some of our group enjoyed a walk through the Old Town of the city, sampling culinary and gastronomic specialties along the way. Others went on a Craft Brew Hall Tour and Tasting or a guided bicycle ride along the river, viewing a wide range of architecture from various periods.

Our next day was a leisurely day on board, gazing at a variety of striking castles, lush vineyards and cozy hamlets scattered along the UNESCO protected Middle Rhine Valley called The Romantic Rhine.

Arriving in Wiesbaden that evening, we disembarked by the beautiful Schloss Biebrich Palace for a sparkling wine reception, followed by a three-course dinner with live music.

The next morning, we arrived in the village of Germersheim, where we boarded our bus to Heidelberg. We took a funicular from the castle to the city center, where we enjoyed lunch of handcrafted beer, traditional white sausages and German pretzels.

After traveling overnight through the locks to Strasbourg, France, some of us took the biking tour through the Black Forest that included lunch and the Famous Black Forest Cake. Others chose the Alsatian Sampler, the best of the French region including lunch and wine tasting.

In Basel, some chose a day of touring Zurich, the world capital of banking and home of Swiss chocolate, with a traditional lunch in a historic guild house. Others explored the Old Town of Basel with a local guide.

The next morning, we took a high-speed train through the beautiful Swiss Alps. We crossed the border into Italy, arriving in Milan, known as the global capital of fashion and design and home to upscale culinary delights at high-end restaurants.

The following morning, we took a bus tour followed by a walking tour through the Galleria Vittorio Emanuele II, an elegant shopping arcade named after the first king of Italy. We later visited the Duomo di Milana, a 14th-century cathedral for a private tour to include a walk on the roof. The roof is topped by 135 delicately carved stone pinnacles and the exterior is decorated with 2,245 marble statues. It is an awe-inspiring piece of work.

That evening, we visited the Santa Maria delle Grazie Gothic Church, where we had a private tour of Leonardo da Vinci’s most famous painting, The Last Supper.

Our last day took us to the beautiful villas and villages of Lake Como, located in Northern Italy’s Lombardy region, an upscale resort area known for its dramatic scenery set against the foothills of the alps. Lunch consisted of a six-course meal at a family-owned trattoria followed by a private boat cruise on Lake Como with views of the lakeside towns with ancient stone bell towers and opulent villas.

What an adventure! It had been almost three years since our Rhine River Cruise was planned and we were ready.

Yes, travel is back! Contact your local travel advisor and start planning your next adventure.