Mary Stone, formerly executive assistant with Beth Moore & Associates, CPAs, has been promoted to office manager. She was formerly affiliated with the law firm of McDermott Ward since 1992, where she served as firm administrator since 2005.

Lisa Marie Samaha, DDS of Port Warwick Dental Arts, has recently been published in an internationally distributed textbook for medical and dental health care professionals: Nutrition and Integrative Medicine: A Primer for Clinicians, Bakhru. Her expertise in advanced nutritional physiology and integrative medicine has been a building block of her dental practice devoted to total wellness since 1982. Her work in Functional and Integrative Medicine has given her an international reputation as a leading-edge educator and clinician. To learn more, go to www.PWDentalArts.com or call 757-223-9270.

Dr. Phyllis Ross, OTD, OTR/L, CHT, CLT, CEO of Pinnacle Hand Therapy and professor of occupational therapy at Howard University (HU), led a lab and lecture in February at Pinnacle Hand Therapy for 30 students in the Master of Science degree program in occupational therapy. Dr. Ross normally teaches online and travels to lecture at HU in Washington, D.C. The students often visit her Newport News clinic, and this year HU approved a lecture and lab on site.

SOLitude Lake Management and staff’s 2017 charitable initiatives resulted in $79,393 in donations of goods and in-kind services to nonprofits, environmental projects and natural disaster victims. The contributions, which benefitted 11,285 families across the country, were supported by 3,512 collective volunteer hours including SOLitude’s Earth Day, Love Your Lake, Little GOBBLERS and HOLiday Cheer programs. Kevin Tucker is CEO of SOLitude Lake Management.

Ann Marie Dori, marketing and outreach coordinator with SOLitude Lake Management, has received the company’s annual Heart & SOL award for her dedication to supporting and improving her local community in Hampton Roads. In 2017, Dori logged a total of 185 volunteering hours and participated in an array of volunteering events. Shown here receiving her award are Kevin Tucker (left), SOLitude CEO, and Marc Bellaud, SOLitude president. 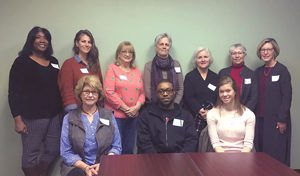 Chris Whalley has been named first head coach of Lionsbridge FC. Whalley brings
11 years of head-coaching experience at the NCAA Division I and II levels and has been three-time conference coach of the year, leading teams to nine winning records in 11 seasons.

Adam Klutts has been named chief executive officer of the Peninsula Metropolitan YMCA. He succeeds Danny Carroll, who retired in March after a 40-year career. Klutts has served the YMCA movement for more than 24 years, including executive positions in Akron, Ohio, and Orlando and Tampa, Florida.

The Hampton Roads Association for Commercial Real Estate (HRACRE) will host its 17th annual Oyster Roast on April 19, at the Khedive Temple property on Woodlake Drive in Chesapeake at 4 p.m. To register, please contact Evette Basnight-Little at 757-481-2494 or sign up for the event at www.hracre.org.

The City of Newport News has launched NNALERT, a new emergency notification system for Newport News residents. Residents sign up and choose the emergency notifications and other important alerts that they would like to receive. The time-sensitive messages are delivered by the method(s) specified by the user—such as home, mobile or business phones, email or text messages. Residents can also designate Newport News addresses about which they would like to receive alerts, such as home, work or a child’s school. Information comes directly from the source, such as National Weather Service, police, fire or other city departments. Initial offerings for emergency notification categories include weather alerts and the One City Marathon. Newport News residents can sign up through the link on the front page of the city’s website at www.nnva.gov. The sign- up page has instructions, an overview of the program and a set of frequently asked questions.

William B. Littreal, CPA, has been promoted to senior executive vice president and chief financial officer of TowneBank. Littreal joined TowneBank in 2008 and has served in several executive roles, currently as chief strategy officer and director of investor relations. He  will continue in his investor relations role. 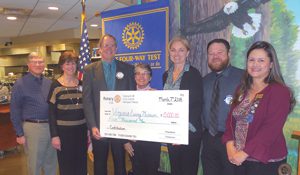 The Warwick at City Center Rotary Club presented $5,000 to Rebecca Kleinhample, executive director of the Virginia Living Museum (VLM) in support of its community efforts. VLM was begun by the Newport News’ Junior League and the Warwick Rotary Club. Through the years, the Warwick Rotary Club, now known as the Warwick at City Center Rotary Club has been a supporter and sponsor of VLM. The donation is from monies raised last year at the Club’s signature fundraiser, the Bacon, Beer and Bourbon Bash. Pictured left to right are foundation members Judie Hines, Dave Grose, Iza Ciesynski; Rebecca Kleinhample; Brian Deibler, foundation member; and Jennifer Daknis, club president. 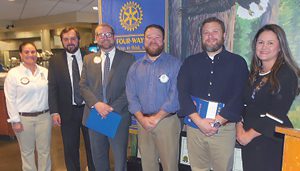 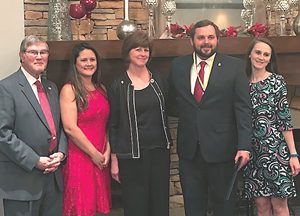 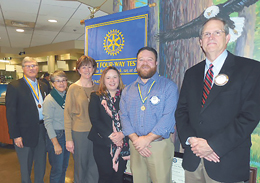 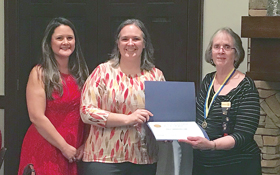 Robert S. McKenna was named president/CEO of the Virginia Peninsula Chamber of Commerce on March 1. McKenna is a retired U.S. Navy captain and graduate of the United States Merchant Marine Academy at King’s Point, NY. He served in the Navy for 27 years as a surface warfare officer with many deployments and senior command positions. Since his retirement from the Navy, he has worked as a government contractor supporting the Navy and as a U.S. Department of Veteran Affairs community liaison on the Peninsula, working to enhance educational and employment opportunities for transitioning service members and their families.

Virginia Peninsula Foodbank was chosen to be one of the partnering food banks for a charitable initiative by C.R. England and its freight brokerage firm, England Logistics. The initiative aims to provide one million meals a year to hungry children. Proceeds from business transactions will be donated to youth programs at food banks. A corporate donation will be given each time a driver delivers a load of freight. The companies will also hold fundraising events to benefit food banks. 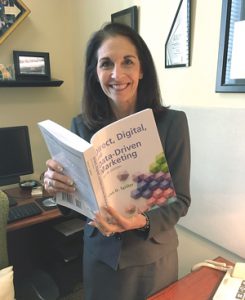 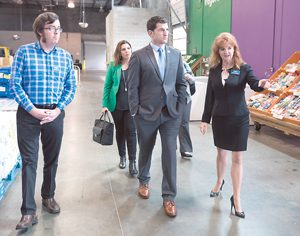 Mark A. Short and Robert Coleman have been inducted as new board members to the corporate board of directors of the Boys & Girls Clubs of the Virginia Peninsula. Short, an attorney with Kaufman & Canoles, P.C., practices in the areas of property rights, real estate transactions, lender representation and litigation in the firm’s Newport News office. Coleman started his career with the Newport News Sheriff’s Office in 1996 and currently serves as judicial services bureau chief, overseeing all operations of the courts, civil process, transportation, information technology, fleet maintenance and the intake and records department.