The City of Newport News and the Newport News Redevelopment and Housing Authority (NNRHA) have begun the second phase of housing for the city’s Choice Neighborhoods Initiative. This project in the Southeast Community is creating housing options and amenities while revitalizing a historic neighborhood. Construction will begin this summer on a development consisting of new homes of varying sizes, commercial spaces and community amenities. Estimated completion time is late fall 2024. Karen Wilds is NNRHA executive director. 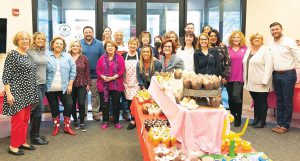 Liz Moore & Associate held its annual Cupcake Wars in February to raise money for the Children’s Hospital of the King’s Daughters. Participating members are shown here in the Newport News office at the start of the fundraiser. More than $20,000 was raised across the four offices. 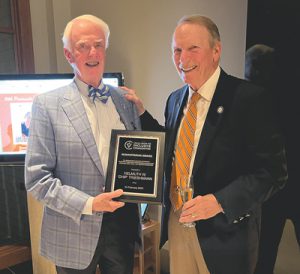 Helmuth W. “Chip” Trieshmann, MD, orthopedic surgeon and former chairman of the board of directors of the Boys & Girls Clubs of the Virginia Peninsula (right), was honored in February as a recipient of the Virginia Center for Inclusive Communities (VCIC) 54th Annual Humanitarian Awards for his involvement in the community. Presenting the award was William T. Saunders, a past VCIC award recipient, who nominated Trieshmann.

Sandy Steward, vice president of information technology with Langley Federal Credit Union (LFCU), has joined the board of Langley for Families Foundation. Steward has been with LFCU for more than 17 years. She is a graduate of Florida Institute of Technology, earning a master’s degree in information systems management.

Dr. Lisa Spiller, distinguished professor of marketing in the Luter School of Business of Christopher Newport University, has written a new textbook, Selling and Sales Management: Developing Skills for Success, a how-to guide to empower students for selling success in any situation. The book, published by SAGE, will be distributed worldwide and features modern concepts, such as sales automation, neuro-linguistic programming, customer relationship management, onboarding and servant leadership. Spiller is an award-winning teacher, an expert on direct and interactive marketing and author of another influential textbook, Direct, Digital and Data-Driven Marketing, now in its fifth edition.

Sharyn Fox has been hired by AH Environmental as an associate in its municipal engineering department. With more than 30 years of experience in the engineering field, Fox was affiliated with WR&A for 14 years. She has served on numerous boards and commissions and is chair of Newport News Planning Commission. She was selected as a recipient for the 2022 Virginia Center for Inclusive Communities Humanitarian Award. Established in 1996, AH Environmental has worked on local projects as well as throughout the United States and around the world in the consulting engineering industry. It is a certified Small Business and SWaM business.

TowneBank has been ranked by Forbes as the #9 bank on its 2022 Best Banks in America list, taking the top spot among all competitors in Virginia and North Carolina. This is the fourth year that TowneBank has appeared on Forbes’ list and the first time appearing in the top ten. Forbes’ 13th annual look at America’s Best Banks ranks the 100 largest publicly traded banks and thrifts based on key metrics related to growth, credit quality and profitability. Alexis Swann is president of TowneBank’s Peninsula and Williamsburg markets. 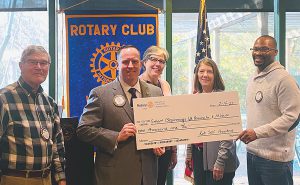 The Rotary Club of Warwick at City Center hosted Diane Umstead, executive director for Smart Beginnings of the Virginia Peninsula (SBVP). Smart Beginnings is a coalition of parents, businesses, civic leaders, nonprofits, school systems, early childhood professionals and private citizens, all working together to ensure that every child on the Peninsula enters kindergarten prepared to achieve success in school and in life. Rob Self, Rotary Club president presented a check of $1,000 to Umstead for SBVP to support 2022 initiatives. Pictured (from left) are Jim Probsdorfer, past board member; Self; Umstead; Davetta Rinehart and Cleon Long, current board members.

Sharon Martin, past president of the Rotary Club of Warwick at City Center, received the Honorary Paul Harris Fellow Award during its 77th Charter Night Celebration. The celebration was held virtually with several members in attendance. The purpose of the Paul Harris Society is to honor and thank individuals for their generous, ongoing support of The Rotary Foundation. Martin, who is vice president and private banker with Old Point National Bank, was recognized for her leadership during the COVID-19 pandemic, keeping the Warwick club moving forward to meet its goals and fundraising to support local and international community service organizations.