Art Newsome, Inc. has been named by Coastal Virginia as Overall Gold Winner for “Best Heating and Air Conditioning Company.” John Kennedy is general manager of the company.

Steven R. “Steve” Drew has been selected Newport News Chief of Police. Drew was formerly deputy chief of patrol operations and business services for the Richmond police department. As Newport News police chief, he will oversee a staff of 600 sworn and non-sworn personnel and an annual operating budget of $49 million. Drew brings 24 years of progressively responsible experience in local law enforcement. He holds a bachelor’s degree in social sciences from Urbana University and a master’s degree in business from Colorado State University.

Stanley P. Leicester, II, has been appointed interim CEO of BayPort Credit Union’s Board of Directors, stepping into the role for BayPort’s President/CEO George R. Dudley, Jr., who is on a temporary leave of absence. Leicester has been serving as senior vice president/chief financial officer and has worked in various capacities at BayPort for 35 years. 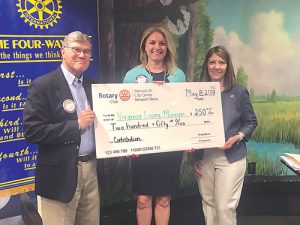 The Rotary Club of Warwick at City Center donated $250 to Virginia Living Museum in memory of former Warwick Rotarian Robert L. Lawson who passed away in April. Lawson joined the original Warwick Rotary Club in 1954 and served as club president in 1970–71. He was instrumental in the founding of Virginia Living Museum in 1966. Pictured (left to right) are James Probsdorfer, past District Governor; Rebecca Kleinhample, VLM executive director and Rotarian; and Davetta Rinehart, president-elect. 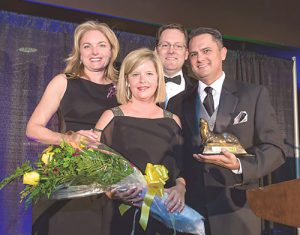 Donna Lynne, Licensed Massage Therapist with DeStress Express Massage and Spa is specializing in Cranial Sacral Therapy (CST), a light touch therapy that balances the central nervous system, improving overall health and well being. This therapy helps clients who cannot accept pressure because of sensitivity such as fibromyalgia or sensory disorders. It also helps with TMJ, migraines, neck or back pain, stress and other tension related disorders.

Newport News Green Foundation has acquired its 21st property located at 5101 Huntington Avenue. This 11-acre parcel, originally a parking lot for the Newport News General and Non-Sectarian Hospital (later known as Riverside Hospital), was transferred from the city to the foundation in March. The foundation is seeking public input on how the property should be used. Interested community members can give input by completing a short online survey, located at www.nngreen.com/5101-huntington-ave. Responses will be collected until August 1, 2018. Sharyn Fox is president of the foundation board. 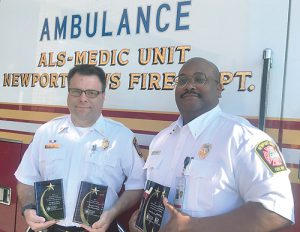 Newport News Fire Department has been recognized as the Peninsula EMS Council’s Outstanding EMS Agency of the year, an award presented to agencies exemplifying outstanding professionalism to the communities it serves. The department also received the council’s 2018 award for Outstanding Contributions to EMS Health and Safety, and Lt. Andre Dorsey was recognized as the Outstanding Prehospital Provider for his work with the department’s Community Paramedicine/Mobile Integrated Health program. Pictured are Assistant Chief EMS Robert Lee (left) and Dorsey.