Joanne “Jo” Wolfley, CPA and Mary B. Oder, CFP, EA, with PBMares, LLP, have been promoted to directors of the firm. Wolfley has more than 25 years of public accounting experience and provides corporate, partnership, LLC tax return preparation, accounting services and payroll support to businesses and not-for-profit organizations. Oder has more than 25 years of experience in accounting and income tax preparation and has served the regulatory compliance needs of the firm’s clients for more than 15 years.

Karen Joyner, CEO of the Virginia Peninsula Foodbank, has been recognized on the 2019 Inside Business Power List, a list of 100 leaders helping to shape the future of Hampton Roads. Joyner has 15 years of experience in the industry and has earned high marks for the nonprofit in finances, accountability and transparency. She has been CEO of the Virginia Peninsula Foodbank for the past six years.

Alan S. Witt, chairman of Riverside Health System, received a 2019 Outstanding Service Award for “Excellence in Governance,” presented by the Virginia Hospital and Healthcare Association. The award honors members of health system governing bodies in Virginia who have a history of making significant contributions to the healthcare field, on both a state and local level, through commitment to service and leadership. Witt has served on the Riverside Health System board since 2001. Witt is partner and CEO at PBMares, one of the top 100 accounting and consulting firms in the nation.

A new online resource is available for cyclists to find a variety of bike trails in Newport News. The trails, which have been added to the Newport News Tourism website include three categories: road biking, recreational biking and mountain biking. Trails cover miles of local terrain, with varying degrees of difficulty. Specific information about each trail is found on the website. For more information, click on “Bike Trails” from the home page of the website at www.newport-news.org.

Carmen Hamner, Lauren Duguay-Jordan and Alison Sakimura have joined the commercial division of Hamner Realty and Hamner Development Company in its Williamsburg expansion. Hamner has lived in Hampton Roads for more than 10 years, selling residential real estate. She represents buyers and sellers, as well as landlords and tenants in office, retail and industrial transactions. An Associate Broker, Duguay-Jordan continues to further her education and participated in the 2017 Virginia Realtors Leadership Academy. She focuses on the sale, purchase, lease or investment of properties in Hampton Roads. Sakimura earned her real estate license using the Long & Foster Military Scholarship Award in 2014 and earned her Associate Broker’s License in 2018. She serves commercial and residential clients. William W. Hamner, Jr. is president and COO of the firm. 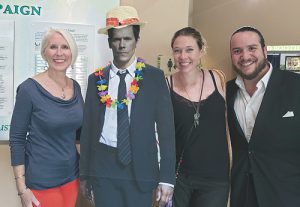 Rotary Club of Warwick at City Center held its 6th annual Bacon, Beer & Bourbon Bash in May in conjunction with the Virginia Living Museum. More than 650 attended, along with 13 restaurants and food purveyors, bourbon cocktails created by some outstanding bars and restaurants, beers from some of Virginia’s finest microbreweries, bacon and bourbon donations and music provided by numerous venues. Food and cocktail judges for the event shown here with “poster boy, Kevin Bacon” were (left to right) Donna Tighe, director of development of Virginia Peninsula Foodbank; Jennifer DePrinzio; and Brian DePrinzio, business manager of Oyster Pointer.

Kitchen & Bath Shop has opened its Newport News showroom at 704 Mariners Row, Suite 102, offering a wide range of modern, traditional and classic kitchens and bathroom options. Harun Abacionglu is general manager and can be reached at 757-599-9000 or by email at harun@kitchenandbathshop.com.

Newport News City Attorney Collins L. “Collie” Owens, Jr. has been named the recipient of the 2019 David P. Bobzien Pro Bono award by the Local Government Attorneys of Virginia. Owens was honored for his work supporting representation of low-income residents in civil matters as president of the Legal Aid Society of Eastern Virginia. His more than 27 years of pro bono service in other capacities were also recognized with his selection for this prestigious award. Owens has worked for the City of Newport News for 35 years, starting as an assistant city attorney and being named by City Council as city attorney in 2012. The award was presented during the Local Government Attorneys’ recent spring conference in Norfolk.

Nicholas A. Smerlis, MD, FAAOS, CAQSH, has joined the orthopedics division of Tidewater Physicians Multispecialty Group. Smerlis is an orthopedic hand surgeon specializing in the surgical and non-surgical treatment of the hand, wrist and elbow, board certified in both general orthopaedics and hand subspecialty by the American Board of Orthopedic Surgeons. Earning his undergraduate degree from Johns Hopkins University in Maryland and his Doctor of Medicine degree from the University of Maryland School of Medicine, Smerlis completed his residency program at the University of Rochester School of Medicine in New York and a hand fellowship program at Wake Forest University School of Medicine in Winston-Salem, North Carolina. He also received a Certificate of Added Qualification in Surgery of the Hand in 2010. With more than 11 years of experience, his special interests within hand surgery include reconstructive and trauma surgery. Dr. Smerlis provides treatment for a variety of conditions ranging from arthritis, nerve compression disorders, systemic diseases to soft tissue injuries, hand fractures and sprains.

Jennifer Daknis, above right, past president of the Warwick at City Center Rotary Club, received an award for her efforts on behalf of the Salvation Army of the Peninsula at May’s award ceremonies. 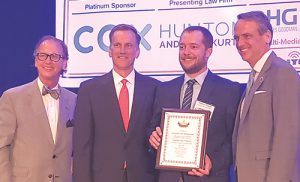 SOLitude Lake Management has been named one of the 50 fastest growing companies in the Commonwealth by the Virginia Chamber of Commerce, ranking 12th out of 50 companies honored during its 2019 awards dinner.

Rance Bryant has been named director of Riverside Health System’s Wellness and Fitness Centers on the Peninsula in Newport New and on the Middle Peninsula in Gloucester. An Arkansas native, Bryant joined the Riverside team in April. Bryant, who attended Arkansas State University and earned his undergraduate and graduate degrees in exercise physiology, brings nearly two decades of experience to Riverside, with the last 10 years spent developing wellness and fitness programming for a large health system. Before joining Riverside, Bryant worked at St. Bernards Medical Center, Arkansas Children’s Hospital and the Conway Regional Medical Center as director of the Health and Fitness Center, notably one of the largest fitness centers in the mid-south.

Brian Martin has been named head brewer of Tradition Brewing Company (TBC). Martin most recently served as head brewer at Cape Charles Brewing Company. Prior to that position, he was affiliated with Avery Brewing Company in Boulder, Colorado, and Three Notch’d Brewing Company in Charlottesville. A native of Charlottesville, Martin served in the Army. While stationed in Germany, he traveled throughout Europe, visiting monasteries, brewpubs, and other brewing operations, where he observed the brewing science and developed a love of the “sour beer experience.” Martin will be responsible for brewing the core beers introduced by TBC and brewing a new signature selection and blending in new seasonal and limited products.