Kelly Peck has been promoted to executive vice president, commercial lending at TowneBank. Peck is located in the Oyster Point office. A member of the Towne family for 23 years, Peck has more than 30 years of industry experience and manages one of the bank’s largest portfolios. She is a graduate of Christopher Newport University.

Michelle Ferebee has joined the Bernardine Franciscan Sisters Foundation board of directors. Ferebee is currently deputy director for strategy of the Aeronautics Research Directorate at NASA Langley Research Center. She is a graduate of the Civic Leadership Institute and a former board member of the Virginia Peninsula Foodbank.

Josh David, Lisa Candella and Adam Krininger have been elected to the Housing Development Corporation of Hampton Roads board of directors. David is a partner in the law firm of David, Kamp and Frank. His practice focuses on litigation and transactional work, largely for the firm’s business clients. Candella is a partner with Beth Moore & Associates, CPAs. She has nearly 25 years of experience in financial auditing in the public and private sectors. Krininger is a planner/scheduler at Newport News Shipbuilding. He holds a Bachelor’s degree and a Master of Business Administration degree in business administration and management from University of Phoenix. 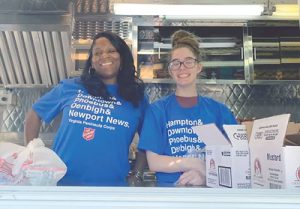 The Salvation Army of the Virginia Peninsula prepares food at its headquarters before distribution to some of the most needy in Newport News.

Stephen E. Sigmon and Jennifer B. Daknis, independent Financial Advisors with LPL Financial and Partners with Point Comfort Wealth Management, have been recognized as two of LPL’s top financial advisors. Sigmon was included in LPL’s Chairman’s Council, and Daknis was included in LPL’s Director’s Club. These premier awards are presented to less than 2 percent (Chairman’s Council) and less than 20 percent (Director’s Club) of the firm’s more than 16,000 financial advisors nationwide. Sigmon and Daknis have offices in Newport News and Williamsburg.