Evergreen Workshop, provider of fine stringed instruments and bows, along with sheet music and accessories, has begun its new school year, offering stringed instruments for purchase as well as rentals. The local violin shop, owned by Terry Allen, violinmaker and graduate of North Bennett Street School of Violin Making in Boston, has expanded its workshop, warehouse and showroom space to better serve the musical community with a focus on instrument rentals and sales for beginning to advanced. For more information, visit www.evergreenviolin.com, email info@evergreenviolin.com or call 757-707-8332.

John W. Herbst, EA has joined City Center Tax Group. Herbst specializes in preparing individual, small business and estate and trust returns. He earned his Enrolled Agent designation with the Treasury Department in 2018. In addition, he holds a Bachelor of Science degree in accounting from College of Staten Island, a Master of Divinity degree from Southern Baptist Theological Seminary and a Ph.D. in bible from Union Presbyterian Seminary in Richmond.

Florence Kingston, Newport News director of development, has been presented the 2019 Cardinal Award from the Virginia Economic Developers Association (VEDA). The Cardinal Award is the most prestigious award bestowed by VEDA to deserving members. It recognizes leadership in the field of economic development, outstanding professional accomplishments and exceptional service to the organization. Kingston, a Newport News native, was recognized for her 40-year career in economic development in the city, starting with the redevelopment and housing authority in 1979 and serving the last 16 years as director of the City’s department of development, as well as secretary/treasurer of the economic/industrial development authorities. 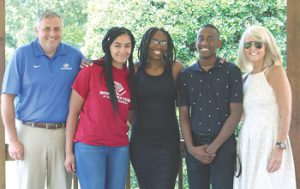 Three Boys & Girls Clubs youth from the Boys & Girls Clubs of the Virginia Peninsula each received a $2,500 college scholarship from the Dale Lucado Scholarship Committee. To honor Lucado, a member of the Boys Club who had a passion for sports, scholarships were presented to the following deserving Boys & Girls Club students who display the attributes Lucado shared with others of courage to overcome obstacles and a love for life: Marissa McKoy-Olivis, Satinika Perrin, and Kivinie Johnson. Pictured are (left to right) Hal Smith, president and CEO; McKoy-Olivis; Perrin; Johnson; and Gail Phelps, committee member.

Robert F. Shuford, Sr., chairman, president and CEO of Old Point Financial Corporation, will retire in January, 2020, after more than 54 years of service. Shuford, Sr. has served on many local organizations and received numerous awards honoring his commitment to business excellence and the community. He will be named chairman emeritus upon retirement and  will continue to serve on the boards of directors of Old Point National Bank, Old Point Trust and Old Point Financial Corporation. Robert F. Shuford, Jr. will assume the joint role of chairman, president and CEO of both Old Point Financial Corporation and Old Point National Bank. Shuford, Jr. has more than 20 years of leadership experience with Old Point National Bank. He serves on the board of directors of Virginia Bankers Association and has been an advocate for community banks in Virginia. He has been featured on the Inside Business Hampton Roads Power List for the last five years and was named Community Banker of the Year in 2016 by the Virginia Association of Community Banks.

Two online maps designed by the Information Technology/GIS department of the City of Newport News won an award at the Commonwealth of Virginia Innovative Technology Symposium (COVITS), in September. The City of Newport News’ interactive Bike Trails map and an interactive map designed for the city’s Toast the Coast: Beer, Wine & Shine Trail won an award for “Best Citizen Portal.” The winning map projects were selected by judges for their “functionality, attractiveness, efficiency, and ease of use” as online portals. They were designed and created by GIS staff, with input and direction from Newport News Tourism.

Susan R. Ralston has been appointed executive vice president and chief operating officer of Old Point National Bank. She served as chief operating officer and senior vice president for the Virginia division of Dollar Bank and prior to that president and chief executive officer for Bank @lantec for more than 22 years before its acquisition by Dollar Bank. She was awarded Washington and Jefferson College’s Cleveland Waltersdorf Award for Innovative Leadership in 2018, as well as Inside Business’ Women in Business Achievement Award in 2010.

The Rotary Club of Warwick at City Center was awarded the coveted Governor’s Cup this summer at the 2018-2019 District 7600’s Change of Leadership and Awards Banquet in Williamsburg. Presented to 2018-2019 club president Davetta Rinehart by outgoing District Governor Susan Zachensky-Walthall, this award is given annually to the club achieving exceptional results, the district’s highest club award. The club competed with 61 other clubs throughout the district. Accepting the award are (from left: Jim Probsdorfer, club member; Carol Chamberlain, club member; Zachensky-Walthall; Rinehart; Priscilla Bele, president-elect and Kevin Lyles, area governor. 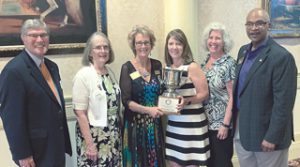 Zachensky-Walthall recognized the club for its work throughout the year, which included the club’s financial support through its Rotary Foundation, an increase in the club’s benefactors and major donors, the development of a strong Rotaract club in conjunction with other clubs on the Peninsula and its development of a vibrant strategic plan. Rinehart is shown accepting the award. Other awards received by the club included Outstanding President Award; Governor’s Circle Award, Rotary Citation Award, Most Improved Club, Club Service Award, Best Club Bulletin Award, Best Rotary Education Award, Community Service Award and District Rotary Foundation Award.

Riverside Health System has been named 2019 Most Wired as a certified level 8. Riverside is the only health system in Virginia to earn the Most Wired recognition for 15 consecutive years. The award was presented by the College of Healthcare Information Management Executives following an annual survey assessing how effectively health care organizations apply core and advanced technologies into their clinical and business programs to improve health and care in their communities. Riverside’s key strengths and leading practices include its electronic health record system—iCare—which is employed in each of the health system’s hospitals, emergency departments, surgery centers, medical practices and M.D. Express urgent care locations to fully integrate patients’ records.

Langley Federal Credit Union (LFCU) and garrett Realty Partners have entered into a joint venture, garrett Mortgage, offering homebuyers a seamless purchase experience from beginning to end. Individuals looking for homes will be able to work with experienced professionals to access an extensive array of mortgage products and services. Tom Ryan is LFCU CEO. Greg Garrett is senior partner and CEO of garrett Realty Partners. 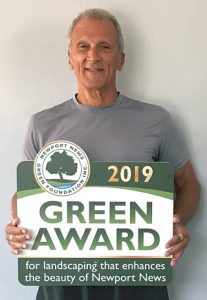 Personal Training Associates, located at 738 City Center Boulevard, Newport News, has been recognized as recipient of the Green Award for the Central District by the Newport News Green Foundation. The award recognizes the business’s efforts to provide landscaping that enhances the beauty of the City of Newport News. Shown here is Brian Cole, owner, with the award.

Virginia Peninsula Foodbank hosted local public servants, along with several of its board members, at the Ninth Elected Officials Volunteer Day as part of September’s Hunger Action Month. A total of 26 local officials and public servants from across the greater Peninsula participated in a volunteer opportunity, assembling food bags for the Food for Kids Backpack Program that helps provide nourishment for children over the weekends. Hunger Action Month is a month-long awareness campaign to mobilize the public to take action on the issue of hunger. 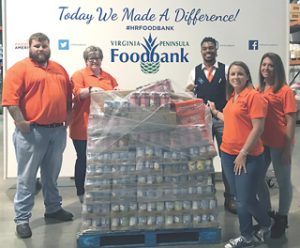 Smithfield Foods employees across the company’s domestic operations collected more than 130,000 pounds of food in support of Hunger Action Month®, the Feeding America® nationwide network of food banks’ awareness campaign. The campaign is designed to inspire people to take action and raise awareness that 37 million Americans, including more than 11 million children, are food insecure. Shown here are employees from the Virginia Peninsula Foodbank who participated in this event.