VersAbility Resources is celebrating its 65-year anniversary with an art expo and ribbon-cutting ceremony at its new Envisions Space, 11828 Fishing Point Drive, Suite 104, on Thursday, October 11 from 4:45-7pm. For ticket purchase, call Keltie Klijanowicz at 757-896-6473 or go to www.versability.org.

Tricia Russell has been hired as chief development officer of Fear 2 Freedom. In this role, Russell will be responsible for creating fundraising strategies, overseeing donor relations and implementing expanded giving opportunities. Russell holds a Bachelor of Arts degree in English from the College of William & Mary. She began volunteering with Fear 2 Freedom in 2014 and became a board member in 2015. She has worked in numerous sectors, including business, finance and retail. Founded in 2011, Fear 2 Freedom is a nonprofit organization dedicated to helping restore hope and dignity to survivors of sexual assault while empowering students and communities to combat sexual violence.

The Lowe’s Charitable and Educational Foundation has awarded a $42,700 grant to Housing Partnership Inc. for “Ramps United.” The “Ramps United” project is a joint project between two partner agencies of the United Way of the Virginia Peninsula (UWVP): House Partnerships, Inc. and Gloucester Housing Partnership. The grant will pay for approximately 12 handicap ramps to be constructed to assist those with disabilities in accessing their home. The entire project serves disadvantaged and disabled individuals who are at or below the poverty level and have the medical necessity for a home handicap ramp. Ramps will be built in Gloucester, James City County, Poquoson, Williamsburg and York County. To date, 150 ramps have been built to provide individuals with a safe living environment year round. 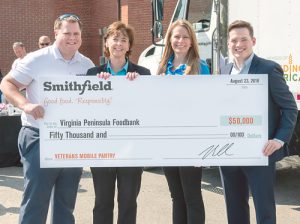 Virginia Peninsula Foodbank (VPF) was the recipient of a $50,000 donation from Smithfield Foundation, the philanthropic arm of Smithfield Foods, Inc., to support VPF’s Veterans Mobile Food Pantry at the VA Medical Center in Hampton. This is the second consecutive year of the partnership, following last year’s donation, which helped increase the number of meals served to veterans by almost 50 percent. VPF’s Mobile Pantry Program delivers and distributes fresh, healthy food directly into communities and neighborhoods. With the support of Smithfield, the mobile pantry visits the VA Medical Center once a month to serve veterans and their families in the Hampton Roads area. Pictured receiving the donation (left to right) are Troy Vandenberg, military talent acquisition manager for Smithfield Foods; Karen Joyner, VPF chief executive officer; Keira Lombardo, senior vice president of corporate affairs for Smithfield Foods, Inc.; and Jonathan Toms, VPF board member and associate manager of charitable initiatives for Smithfield Foods. 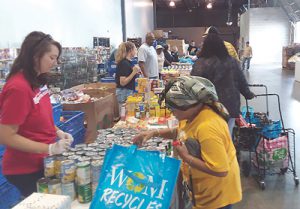 As part of its Strategic Initiative to augment nutritious food distribution in high need communities, Virginia Peninsula Foodbank implemented a Community Food Pantry Day at its warehouse in Hampton. This initial distribution served 89 families, including 61 seniors, 100 adults and 114 children.

Jessica Gourley, RN, and Mary Haigh, RN, both of Riverside Health System, were recognized by the Virginia Nurses Association, spotlighting 40 exceptional rising nursing leaders under age 40. Gourley received top honors and Haigh received an honorable mention. The winners were selected from nominees of Virginia’s outstanding young nurse leaders, based on their achievements in professional practice, leadership and positive promotion and advancement of the nursing profession beyond the practice setting. Gourley successfully implemented action plans that boosted teamwork, patient safety and community involvement, including the use of yellow blankets to be given to patients designated as a high-fall risk. This tactic, combined with a unique “banana bucks” team incentive program, led to a 46 percent reduction in patient falls year over year. Haigh’s emergency services background includes 11 years of EMS experience, and she volunteers at least weekly for the Isle of Wight Volunteer Rescue Squad, where she earned the 2017 ALS Provider of the Year Award for her dedication, clinical expertise and leadership.

Riverside Regional Medical Center’s
recently completed 150,000-square-foot expansion at the Pavilion transformed the center into a fully private room hospital, with each of its 144 rooms featuring windows that allow for natural light to aid in the healing process. The $75 million expansion opened for patient care in September. The expansion brings the Pavilion to 400,000 square feet.

The 14th Annual Port Warwick Art & Sculpture Festival, on Saturday and Sunday, October 13 and 14, will feature an array of artists including Aleksandr Maryaskin, 2017 Best In Show winner. Maryaskin is owner of Simply Unique Jewelry in Yorktown. Also returning is Dale Lewis, 2017 1st place award winner and popular wood sculpture artist from Alabama. Guest judge will be James Warwick Jones, former gallery manager of the Charles Taylor Visual Arts Center in Hampton, who retired in June after a 47-year career as an art teacher, curator and art center manager.

Virginia Living Museum (VLM) recognized its valued volunteers at its annual Volunteer Recognition Banquet, with special recognition including hours of service, years of service, departmental awards and the Gloria Lombardi Award. Dr. Larry Sacks received the Gloria Lombardi Award for Volunteer Excellence, the lifetime achievement award given in recognition of his support and loyalty to VLM for almost 30 years of dedicated service. The Cardinal Club is a prestigious group of 12 volunteers who have reached more than 5,000 hours or 20 years of service. Club members Sacks and Virginia Gall, were recognized for 5,500 hours of service and are members of the Cardinal Club. Brad Halcums was inducted into the Cardinal Club with 5,000 hours of service. Other VLM volunteers were recognized for reaching service milestones in the past year. These volunteers include Kim Becker (8,000 hours), Art Whittaker (6,500 hours), Karl Rebenstorf (4,500 hours), Vicky Lippolis and Juanita Slack (4,000 hours), Mary Dolores Ciraulo (3,500 hours), Barbara Boyer (3,000 hours), Hank Sheele, Debbie Cornier, Ros HaLevi, Nancy Finn, and Jerri Bastian (2,000 hours), Ralph “Smitty” Smith, Emili Fin, Roseann Carlson, Charlotte Boudreau, Dennis Milner and Kathryn Hamilton (1,500 hours), and Judy Molnar, Pam Goode, Cynda Carlton, Dreck Hanak, and Laura Marlowe (1,000 hours). VLM volunteers enhance the experience of guests, are an integral part of the staff and enrich the lives of the animals.

Laura C. Hoey has joined Kaufman & Canoles, P.C. as an associate in the Newport News office. She will be a member of the firm’s Litigation and Eminent Domain practice groups. Hoey was formerly a law clerk with the United States District Court for the Eastern District of Virginia. The Litigation Group at Kaufman & Canoles has experience working on trials of extreme complexity before juries and judges, in both federal and state courts. Its practice includes alternative dispute resolution, including arbitration and mediation, and frequently counseling clients on how best to avoid litigation.

Philip Hatchett and Jim Windsor have been selected for inclusion in The Best Lawyers in America® 2019. Since it was first published in 1983, Best Lawyers® has become universally regarded as the definitive guide to legal excellence. Hatchett’s practice involves trusts and estates. Windsor’s practice focuses on real estate law.

Virginia Living Museum (VLM) joins the Luray Caverns, Natural Bridge State Park and 22 others as one of the newest stops of the Virginia Cave and Karts Trail. The trail is a collaborative project between the governor-appointed Virginia Cave Board and the Virginia Department of Conservation and Recreation. With more than 12 stops, the trail gives visitors the opportunity to learn about and appreciate caves and karts features. The goal of the trail is to educate the public about sensitive environments and to promote their protection. Rebecca Kleinhample is VLM’s executive director.

Andrea Signori, a Jefferson Lab postdoc in the Theory Center, was awarded a Marie Skłodowska-Curie Fellowship (MSCA) through the European Commission, the executive of the European Union. The MSCA allow researchers to conduct research across international boundaries. Signori’s proposal was one of 1,348 selected for funding out of 9,089 proposals submitted to the program. The work on Signori’s research project, SQuHadron–Strategies to Tackle the Quest for Hadronization, will be conducted between his future home institution, the University of Pavia, partnering with Jefferson Lab. He will spend 24 months at Jefferson Lab and 12 months at Pavia.