Dr. John Dever, retiring Thomas Nelson Community College president, has been elected to the Bernardine Franciscan Sisters Foundation board of directors. Dever will serve a three-year term and can be invited to serve two additional three-year terms. Sheriff Gabriel Morgan and Jeffrey Verhoef, former CEO of Tidewater Physical Therapy, were elected by the board to serve as chairperson and vice-chairperson, respectively. Each will serve a two-year term. Verhoef will then assume the role of chairperson.

Mallory C. Joyce, CLU, ChFC, CLTC, ChSNC, Anchor Financial Group, has been named to the 2019 Million Dollar Round Table (MDRT) for the 23rd year. MDRT is the premier association for the world’s best sales professionals in the life insurance-based financial services business.

United Way of the Virginia Peninsula and the Virginia Peninsula Chamber of Commerce have formed a partnership of the Emerging Leaders Society (ELS) to foster Young Leadership on the Virginia Peninsula for those between the ages of 20 and 40. ELS is a group of passionate, altruistic peers who, through developing as leaders, serve their community and pursue positive change for the future. Working to achieve the goal of creating change on and for the Peninsula through addressing and discussing community’s challenges with leaders, they participate in various community volunteer opportunities, contributing financially to non-profits and networking with mentors and young leaders. For more information on becoming a member of ELS and upcoming events, visit www.uwvp.org/emerging-leaders-society. 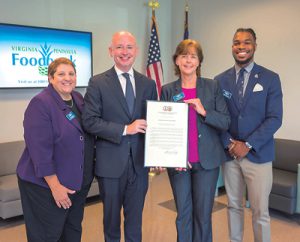 Delegate Mike Mullin presented a Commending Resolution from the Virginia General Assembly to the staff of the Virginia Peninsula Foodbank for its work for furloughed workers during the partial government shutdown in January. The Foodbank provided special food distributions to TSA workers at the airport, to Coast Guard families at the Yorktown Coast Guard training facility and to NASA and others through multiple special distributions at the Foodbank. Shown here (left to right) in addition to Delegate Mullin (second from left) are Renee Figurelle, Foodbank COO; Karen Joyner, Foodbank CEO; and Andrew Council, food sourcing manager.

In conjunction with the United Way 2020 Campaign Kickoff, Newport News Shipbuilding (NNS) and its parent company, Huntington Ingalls Industries (HII), are supporting United Way of the Virginia Peninsula in its 2020 campaign by jointly contributing a $1,000,000 gift on behalf of the community. HII Executive Vice President and NNS President, Jennifer Boykin, will serve as United Way 2020 campaign chair.

The Go Figure Exhibition Series, a new exhibition series is on view at Peninsula Fine Arts Center (PFAC) until January 5, 2020. This series examines the artistic strategies employed in recreating the human form. The works on view consider how individuals see themselves and others. Go Figure is composed of four different exhibitions. For specific information on the exhibitions, call 757-596-8175 or visit www.pfac-va.org.

Philip Hatchett and Jim Windsor, of Kaufman & Canoles, P.C., have been selected among the 45 attorneys of the firm for inclusion in The Best Lawyers in America® 2020. Since it was first published in 1983, Best Lawyers® has become universally regarded as the definitive guide to legal excellence. Best Lawyers lists are compiled based on an exhaustive peer-review evaluation. Hatchett’s practice involves trusts and estates. Windsor’s practice focuses on real estate law.

Lions Bridge Financial Advisors (LBFA) has named Quannese Hildebrand, of Woodside High School, and John Cho, of Menchville High School, recipients of its 2019 Colleen Rink Memorial Scholarships. Each received $1,000 toward college tuition for their freshman year. For 2019 scholars, LBFA chose to honor the life of Bayside High School honor student and soccer player, Colleen Rink, to sustain her legacy of excellence, generosity and love. Hildebrand is attending the School of Social Work at Virginia Commonwealth University and Cho is attending the College of William & Mary. Both students have overcome difficult economic and personal challenges and have been recognized by LBFA for their hard work and commitment to success as they strive to overcome these challenges, inspiring other students, teachers and administrators. Jayne Di Vincenzo is president of Lions Bridge Financial Advisors.

The 4th Annual Red Kettle Classic Golf Tournament, sponsored by the Salvation Army of the Virginia Peninsula, will take place on Thursday, October 3, at Kiln Creek Golf Club. Registration starts at 11 a.m. with a shotgun start at noon. Among the events scheduled are mulligans, raffles and half-the-take available for purchase. Silent auction items will be available for bidding, and a dinner and awards reception takes place after the tournament on the patio. To register, sign up for sponsorship or obtain additional information, go online to virginiasalvationarmy.org/vapenredkettleclassic.

Shirley Wang, in the Newport News Office at Berkshire Hathaway HomeServices Towne Realty, is among the 14 Southeastern Virginia’s “Best” REALTORS® joining the “Sign of Success.” Wang’s specialty is residential real estate. Each of Towne Realty’s team members is committed to client care with a focus from residential resale to new construction.