Alonzo R. Bell, Jr., CCIM, has joined Harvey Lindsay Commercial Real Estate as senior vice president. Bell has been in commercial real estate since 1989 and was principal broker for Randolph Real Estate Services Company, a company he founded in 2000. A Newport News native, Bell received his BSE from Princeton in civil engineering and operations research. He is a graduate of the Virginia Peninsula Chamber of Commerce Leadership Institute, the Hampton Roads Chamber of Commerce Leadership Program and the Minority Business Executive Program at the Darden Graduate School of Business at the University of Virginia.

Kaufman & Canoles, P.C. has been named one of the 2020 Best Places to Work, fourth place, mid-sized companies. This annual list is created by Inside Business. Organizations from across the state participate in a two-part survey process to determine the Best Places to Work in Virginia. This award identifies and honors the best places of employment in Virginia, benefiting the state’s economy, its work force and businesses.

Brown Edwards has been recognized as one of the Top 50 Construction Accounting Firms in the nation. Its commitment to the industry is demonstrated through its involvement in the Certified Construction Industry Financial Professional (CCIFP) designation, with 11 construction team members who have achieved the designation. Since 2017, the firm has ranked first in the Mid-Atlantic Region and Top 10 in the country in terms of the number of CCIFPs on staff. The CCIFP designation is the only industry-recognized certification that indicates a financial professional is dedicated to promoting best practices in construction financial management. Brown Edwards ranks among the nation’s Top 100 firms, moving up six places to #81, as reported by INSIDE Public Accounting in its 2020 annual financial performance analysis of the nation’s largest public accounting firms. The rankings are based on 2019 U.S. net revenue. This report is the most accurate listing of the nation’s largest accounting firms based on fiscal performance. Hugh Barlow is the firm’s partner in the Oyster Point offices. 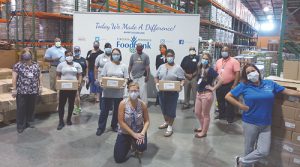 Sentara Healthcare and Truist came together with the Federation of Virginia Food Banks to create the We Care COVID-19 Virginia Emergency Food Support Plan. There will be 50,000 boxes of food distributed throughout the Commonwealth to strengthen Virginia’s emergency food support system to provide nourishment to families during the COVID-19 pandemic. A group of volunteers from Sentara CarePlex, Sentara Williamsburg Regional Medical Center and Sentara corporate headquarters packed more than 400 We Care boxes at Virginia Peninsula Foodbank that were distributed in August at COVID testing sites across the Virginia Peninsula.

All 12 Sentara hospitals have earned Leader in LGBTQ Healthcare Equality status in the 2020 Healthcare Equality Index (HEI) survey, a national LGBTQ benchmarking tool from the Human Rights Campaign (HRC). HEI evaluates more than 1,600 individual healthcare facilities’ policies and practices as they relate to the equity and inclusion of their lesbian, gay, bisexual, transgender and questioning patients, visitors and employees. Leader status is HEI’s highest designation and can only be attained by earning a top score of 100 in the 2020 HEI survey. Sentara hospitals’ top scores make them members of an exclusive club in Virginia. Only four other facilities in the Commonwealth hold Leader status.

Mychal Manolatos has been named the new leader of SOLitude Lake Management He joined SOLitude in 2016 and has more than 15 years of experience leading various teams and businesses across multiple industries. Marc Bellaud has been named to the new role of director of technical services. An industry veteran with nearly 30 years of experience, Bellaud has been actively involved in advancing the science of aquatics as a good steward and widely respected thought leader. Kevin Tucker is SOLitude’s founder and former CEO. 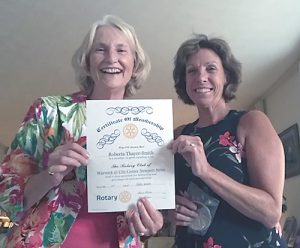 Roberta Thayer-Smith has joined the Rotary Club of Warwick at City Center. Sponsored by Anne Wozniak (right), Thayer-Smith is a retired Newport News School administrator and currently employed as a VTSS systems coach for the Virginia Department of Education at VCU.