Stephen Abbitt has been named executive vice president of the Abbitt Group. Abbitt will serve under president, Charles Wornom, managing day-to-day operations and strategic initiatives. Abbitt will continue serving the community through his involvement in the Abbitt Family Foundation. The Abbitt Group is the parent company of the Abbitt Realty and Abbitt Management divisions. Abbitt is an independent, family-owned real estate firm specializing in residential home sales; property development; and the management of single-family, multifamily, residential associations and commercial properties.

Leonard C. Heath, Jr,, partner with Heath, Overbey, Verser & Old, PLC, has been sworn in as president of the Virginia State Bar for a one-year term, which began in June. Heath is the first lawyer from the Virginia Peninsula to hold the office in more than 50 years. Formed in 1938 as an arm of the Virginia Supreme Court, the Virginia State Bar regulates and licenses more than 50,000 attorneys statewide. In his law practice, Heath works with state and federal courts, specializing in civil litigation that includes personal injury cases, business disputes, real estate litigation and wills and trusts. 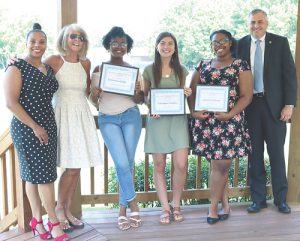 Criner Remodeling was feature on the cover of July’s Qualified Remodeling’s Customer Satisfaction Report. The report in this national professional journal profiles 35 award-winning remodelers who understand the importance of delivering exceptional customer service, earning exemplary customer satisfaction scores. With an all-time GuildQuality recommendation rate of 97.39 percent, Criner Remodeling shared its best practices and expressed how it uses client feedback to grow its business and excel at service quality. Robert Criner, GMR, CAPS is president of the company.

September events scheduled by the Virginia Peninsula Chamber of Commerce include Coffee Connection, September 12 and Business Connection After Hours, September 27. To register, go to www.virginiapeninsulachamber.com/events/details/2018-coffee-connection-the-mariners-museum-and-park-091218-8139.

Corey Keeling has joined CENTURY 21 Nachman Realty and its team of real estate agents. Keeling graduated from Christopher Newport University with a Bachelor of Arts degree in psychology. Keeling will specialize in the sale and purchase of residential single family houses, townhouses and condos. 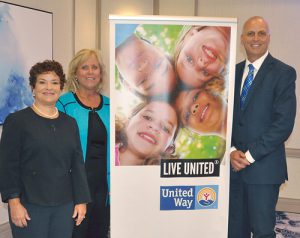 United Way of the Virginia Peninsula’s CEO breakfast in July initiated its 2019 campaign and recognized corporate companies who have supported its work within the community. More than 70 Peninsula agency and corporate CEOs reflected on United Way accomplishments in the community and plans for the upcoming campaign. The breakfast was hosted by Teresa L. Edwards, corporate vice president for Sentara Healthcare and United Way’s 2019 campaign cabinet chair. Shown here are (left to right) Jennifer Boykin, executive vice president and president, Huntington Ingalls Industries and Newport News Shipbuilding and 2019 campaign cabinet chair-elect; Edwards and Steven S. Kast, president and CEO, United Way of the Virginia Peninsula.

Four fellowships have been awarded by the Electron-Ion Collider Center at the Department of Energy’s Thomas Jefferson National Accelerator Facility (EIC Center at Jefferson Lab) to 2018 postdoctoral research fellows and graduate student fellows who will be pursuing research related to a proposed electron-ion collider over the next year. The postdoctoral research fellow recipients are Cristiano Fanelli, Massachusetts Institute of Technology, who will explore the use of machine learning in designing particle detectors for the EIC, and Timothy Hobbs, Southern Methodist University, who will work on the framework for fast evaluation of the impact of proposed measurements at the EIC. The graduate student fellows are Mitchell Kerver, Old Dominion University, who will explore what information an EIC can provide on the three-dimensional structure of deuterons (the nuclei of heavy hydrogen atoms that are comprised of one proton and one neutron), and Richard Trotta, Catholic University of America, who will study how an EIC can help scientists better understand the structures of subatomic particles called pions and kaons. Fellows will spend at least half of their time during the fellowship duration at Jefferson Lab. Funding for the fellowship program was provided by the Commonwealth of Virginia.

Ferguson Enterprises is partnering with Peninsula Council For Workforce Development and its Workforce Development Board and local training providers to develop a shorter-term credential program for the plumbing industry. A pilot nine-week (72-hour) training class offers possible employment after the third week if the student continues in the training program, OSHA-10 Certificate, and NCCER CORE Curriculum Certification. The model being launched for the pilot will be taught at New Horizons Regional Education Center in Hampton. Training fees are covered for this pilot program and interested candidates should call 757-766-1101 for information.

Samuel J. Lunsford, CPA with Malvin, Riggins & Company, P.C., has been promoted to tax and accounting manager of the firm. He will support the firm’s partners, staff and clients in tax matters and work with a select group of other managers on the administration side of the practice, primarily getting the internal training program up and running. 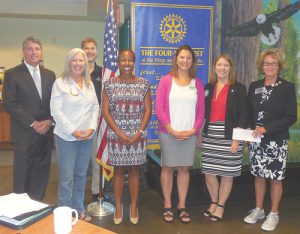 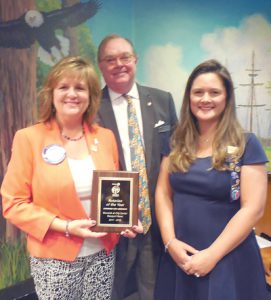 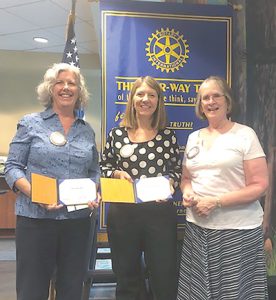 Priscilla Bele, president-elect and Davetta Rinehart, club president of the Warwick at City Center Rotary Club, received certificates as Rotary International Foundation Benefactors by Carol Chamberlain, foundation chair. Benefactors commit to donate at least $1,000 to the Foundation’s Permanent Fund through their wills and estates. Pictured are (left to right) Bele, Rinehart and Chamberlain.