Riverside Health System (RHS) has been named a Screening Center of Excellence by the GO2 Foundation for Lung Cancer for its ongoing commitment to responsible lung cancer screening. Designated Screening Centers of Excellence are committed to provide clear information on who is a candidate for lung cancer screening based on current evidence and to comply with comprehensive standards reflecting best practices developed by professional bodies such as the American College of Radiology, the National Comprehensive Cancer Network and the International Early Lung Cancer Action Program.

RHS has also achieved certification with the requirements of the International Organization for Standardization for compliance with ISO 9001:2015 Quality Management Systems. This reflects the system’s long-standing commitment to quality, consistency, continual improvement and patient satisfaction. The multi-site certification is valid for three years and includes all of the acute care hospitals, ambulatory surgery centers and provider-based practices within Riverside Health System.

RHS’s robotic surgery program has been upgraded with the next generation da Vinci Xi Surgical System. This newest model allows surgeons to perform more common procedures than on the previous model. With a new overhead arrangement, robotic arms are able to expand for better movement, reach and dexterity, offering surgeons better access to more parts of the body. According to Brian Billings, M.D., service line chief and colorectal surgeon with Riverside Surgical Specialists, this is a revolutionary advancement for the treatment of benign and malignant tumors of the colon, rectum, lungs, esophagus and chest wall. 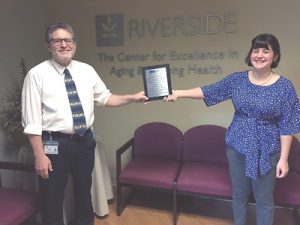 Riverside’s Center for Excellence in Aging and Lifelong Health has received a Southern Gerontological Society Best Practices Award for its work in Dementia Medication Reviews and the impact the program has had on people living with dementia and their caregivers. The Best Practices Award recognizes programs, organizations or aging services that engage in innovative and collaborative approaches intended to improve services and the quality of life for older adults. Shown receiving the certificate of recognition are Barry Rumble and Jennifer Purdy, Riverside Health System clinical pharmacists. 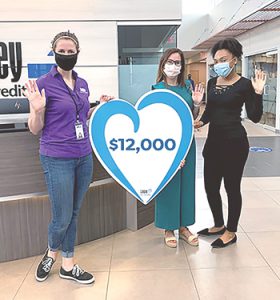 Dr. Angela Spranger has been named assistant to Christopher Newport University (CNU)President Paul Trible for equity and engagement and has become chief diversity, equity and inclusion officer of CNU.  Spranger will work with Trible to engage the CNU community in launching the Strategic Plan for Diversity and Inclusion, approved by the Council on Diversity and Inclusion; plan and implement a series of community conversations about the Black experience, racism and the systemic injustice in housing, education, healthcare, jobs and other institutions; plan and implement a training program on racism and the importance of diversity, inclusion and equity that will be required for all students, faculty and staff. Spranger holds a doctorate degree in organizational leadership from Regent University, a Master of Arts degree in education in human and organizational learning from George Washington University and a Master of Business Administration degree from Virginia Commonwealth University.

Kelvin International Corporation (KIC) has purchased a building at 742 Bluecrab Road, through its investment company, Kelvin Holdings LLC, and moved its operations in July. KIC designs, develops, manufactures and maintains cryogenic equipment that is in daily use in every continent.

Carissa Swain Ahava, comptroller, has been promoted to vice president of operations. She will be responsible for assisting with financial and operations strategic objections. Al Guerra, Jr. is KIC’s president and CEO. Janice Sherwood is secretary/treasurer and CFO.

Sarah Fulton has been named vice president of operations of The Lee Group, charged with leading the staffing and recruitment firm’s team, serving companies and applicants throughout southeastern and central Virginia. Fulton previously served as branch manager of The Lee Group’s Chesapeake office. In her new position, Fulton oversees the operations of the three branch offices of Chesapeake, Newport News and Richmond. Fulton is also responsible for interacting with front-line employees.

Wes Ashworth has been named vice president of Executive Search for Lee Group Search. Ashworth is charged with leading the executive recruitment and placement for companies across the U.S. and throughout southeastern and central Virginia. Ashworth joined the firm in 2014 as an executive search consultant. In his new role, Ashworth will lead the executive search division, from operations, training new consultants, hiring new recruiters and the continued growth of the organization.

Majors Jim and Jennifer Spencer assumed command of The Salvation Army of the Virginia Peninsula, also known as the “Virginia Peninsula Corps,” in July. The Spencers have come to the Peninsula from Brevard County, Florida, where they last served. They succeed Captains Michael and Malaika Good, who now serve the Meridian Corps in Mississippi in the Salvation Army USA’s Southern Territory. Together, the Spencers have more than 25 years of experience as officers in the Army. 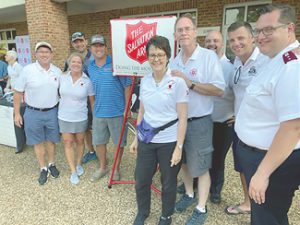 The Salvation Army of the Virginia Peninsula will host its fifth annual Red Kettle Classic Golf Tournament on Thursday, September 24 at Kiln Creek Golf Course. Proceeds from the event will be used to support programs that provide veterans, families, and others in need with food, shelter, and assistance throughout the year within the community. Shown here are members of the Salvation Army – Virginia Peninsula team and top sponsors, Haywood Flooring and North River Construction. To register and for additional information, visit virginiasalvationarmy.org/vapenredkettleclassic or contact John Colston at RedKettleClassicSAVP@gmail.com.

Soundscapes has assumed management of the Peninsula Youth Orchestra (PYO) and will grow its comprehensive music education program for youth from first grade through age 25. PYO served as a full symphony, community orchestra for young musicians of all abilities on the Peninsula for 60 years. Several years ago, Soundscapes and PYO partnered to increase their community impact, with volunteers from PYO providing music education and performance opportunities for Soundscapes’ older, more advanced students, and Soundscapes providing transportation, musical instruments and tuition. When COVID-19 forced both organizations to cease in-person classes, PYO was unable to continue its operations and approached Soundscapes to ensure youth throughout the region continue to have access to quality musical education. Soundscapes is a nonprofit organization that develops critical life skills in students from first through twelfth grade in Newport News, using high quality music education and frequent performance opportunities.

Newport News Shipbuilding’s Apprentice School has been approved by the State Council of Higher Education for Virginia to operate as a postsecondary institution. The certification gives the school the authority to grant academic degrees, enhancing its national reputation as the model apprenticeship program. The school plans to grant associates of applied science degrees in maritime technology in 26 disciplines, including maintenance electrician, marine designer and nuclear test technician. Final approval of the degree programs by the Council of Occupational Education is expected later this year. Partnerships with Thomas Nelson Community College, Tidewater Community College and Old Dominion University have provided students with the opportunity to earn associate degrees in business administration, engineering and engineering technology and bachelor’s degrees in mechanical or electrical engineering. The new certification now gives the school the ability to grant and confer degrees of its own. The Apprentice School offers four- to eight-year, tuition-free apprenticeships in 19 trades and nine optional advanced programs. Apprentices work a 40-hour week and are paid for all work, including time spent in academic classes.