Top June agents for the Coldwell Banker Traditions–Peninsula office were Pat Lantz for sales and Sandra Hood for listings. The firm is expanding and hosting a grand re-opening on September 9.

Sentara Healthcare has hired Dr. Keith H. Newby as an independent contractor to be the system’s Medical Director of Health Equity to help the organization address health disparities. Newby will work with Dr. Jordan Asher, chief physician executive; Iris Lundy, director of health equity; and other system leaders to aid in the development of programs that address conditions that disproportionately affect underserved and underrepresented communities, with a specific focus on the Black and Brown communities in Hampton Roads and throughout Virginia and northeast North Carolina. 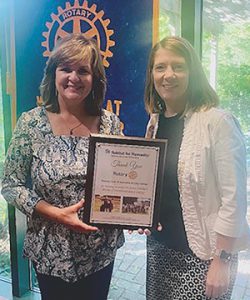 Habitat for Humanity presented a plaque to the Rotary Club of Warwick at City Center in June at the dedication of the James’ family home in Newport News. The “Rotary” House was built in partnership with five Rotary clubs that came together and raised $100,000 in cash and in-kind donations to fund the building of the house. Rotarians worked alongside the new homeowner over the past year to build the home. Shown here receiving the plaque are Sharon Martin, president (left) and Davetta Rinehart, past president. 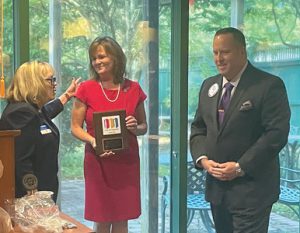 Rob Self, principal at Frontline Financial Strategies, was inducted new president of the Rotary Club of Warwick at City Center on July 1 for the 2021– 2022 Rotary year, with the baton being passed from outgoing president, Sharon Martin (center). Martin, who demonstrated leadership during the pandemic to keep the club strong and meeting first virtually, and then in a hybrid model of both zoom and at the Virginia Living Museum, was presented the club’s Rotarian of the Year Award from outgoing District Governor, Ms. Judy Cocherell. The theme for Rotary’s 2021–2022 service year is “Serve to Change Lives.”

Joey Wallen and Stephen Sibert, nationally certified personal trainers with Personal Training Associates, have each completed their studies and are now certified by the American Council on Exercise (ACE) as Functional Training Specialists. This highly regarded program qualifies them to enable clients of all ages to more safely and efficiently perform their specific daily activities with better balance and joint stability.

Newport News/Williamsburg Airport is working to support a new daily air service from Newport News to Washington Dulles International Airport (IAD) upon receiving one of 22 grants from the U.S. Department of Transportation under the Small Community Air Service Development Program. The $847,646 in funding will be used for an economic development project to fund a minimum revenue guarantee and marketing expenses to recruit, initiate and support for the new service to IAD. Nonstop access to IAD will help provide connectivity to government and military agencies that have ties to the DC region. United Airlines filed a letter in support of the airport’s request for funding. Michael A. Giardino, C.M. is executive director of Newport News/Williamsburg Airport.

The City of Newport News has been awarded $563,129 by the Virginia Port Authority Aid to Local Ports Annual Grant Program for improvements at Seafood Industrial Park. This highly competitive grant program offers $1,000,000 annually for capital improvements to publicly owned marine facilities that support commercial port activities in Virginia. This grant award allows for renovation and improvements to the west bulkhead and unloading facility located in the inner harbor of Seafood Industrial Park, which will result in increased mooring capacity and revenue collected for its use. The grant represents 75 percent of project’s funding, with a 25 percent city match being funded from the approved Fiscal Year 2022 operating budget local grant match monies.

Virginia Peninsula Foodbank hosted a visit from Claire Babineaux-Fontenot, CEO of Feeding America, the network of 200 foodbanks around the country. Prior to receiving a tour of the Foodbank, Babineaux-Fontenot spoke to invited guests regarding the work of food banks during the pandemic and into the future, answering specific questions from those in attendance. Shown here with Babineaux-Fontenot (7th from the left) are Foodbank staff, board members and partner agencies, along with Congressman Bobby Scott. 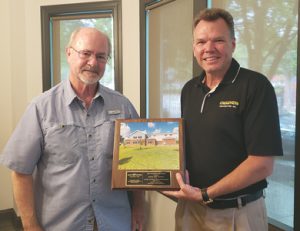 EPOC Construction and Michael Henry Architect were named to Varco Pruden’s 2021 Hall of Fame for a new gym and classroom building facility built for Calvary Reformed Presbyterian Church in Hampton. The two-story 11,200 square foot multi-purpose building, completed in August 2020, includes a full court basketball gymnasium, commercial kitchen, restroom facilities and a partial second floor for classroom space. The first and second floors were designed for future expansions. Varco Pruden (VP) is one of the nation’s largest building-solutions companies, with a network of nearly 1,000 builders across the United States and Canada. The highly competitive Hall of Fame awards are presented annually to the independent authorized VP builders whose work reflects innovation and excellence though the integration of VP building systems and products, architectural appearance, end use and design. Shown accepting the award are Henry (left) and Ken Bingman, president of EPOC Construction.