Austin Sneath, Marcus Jones and Annette Webb are celebrating their five-year anniversaries with Moore, Candella & Associates, CPAs. Sneath, a senior associate, serves the firm in its audit and accounting division as a lead auditor on many of the firm’s local nonprofit audits as well as its multi-state Timeshare Association audits. He also practices in the area of tax. Sneath is a graduate of Old Dominion University with a BBA in accounting and finance.

Marcus Jones, a senior associate, serves the firm in its audit and accounting division as a lead auditor on many of the firm’s local nonprofit audits as well as its multi-state Timeshare Association audits. He also practices in the area of tax. Jones is a graduate of Coastal Carolina University with a BBA in accounting. He is a 2022 graduate of Peninsula LEAD and serves as a Virginia Peninsula Chamber of Commerce ambassador.

Sharon Martin has been promoted to senior vice president of Old Point National Bank (OPNB). Martin has been with OPNB for 20 years, rising from a customer service representative to branch manager to private banker. She has been awarded the Bankwide recognition of President’s Leader for three consecutive years. As a private banker, Martin is responsible for accommodating the banking and financial needs of its community’s business owners and professionals. 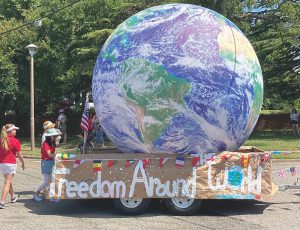 Sister Cities (SCNN) participated in Newport News’ 1st Juneteenth Parade on June 11. The parade route began at Brooks Crossing and finished at King-Lincoln Park. Citizens from across Newport News came out to celebrate and kick-off a full week of Juneteenth Events. SCNN’s float celebrated “Freedom Around the World” and featured a 10-foot inflatable globe. Participating in the success of the parade were NN Parks, Recreation and Tourism, the Newport News Department of Communications and parade volunteers Steven Tung, Baylee Wang Goldstein, Louise Wang and Hobie Hobert.

Above right: Sarah Browning (left) was elected 2022 Rotarian of the Year for her determination, energy and commitment and her leadership with Rotary’s annual signature fundraiser, Bacon Bash. Presenting her award is Lempke. 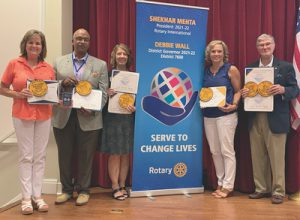 At the District 7600 Awards and Change of Leadership Luncheon in July, the club was recognized with numerous awards, including recognition of Sharon Martin, past president, honored as an “Outstanding President” for the 21–22 club year; recognition of all clubs in District 7600 for 100 percent achievement; and acknowledgment of key areas including bulletin, website, foundation, public image, education, youth leadership and youth service. Pictured (left to right) are Sharon Martin, Kevin Lyles, Davetta Rinehart, Amber Lempke and James Probsdorfer.

Newport News Commissioner of the Revenue Office has released its latest installment of its expanded PSA campaign translated into American Sign Language, providing citizens with information regarding tax support, business licenses, personal property as well as a general overview of services available to taxpayers. This installment makes Commissioner of the Revenue Tiffany Boyle the first elected official in Hampton Roads and the only elected constitutional official in the Commonwealth to provide PSA’s in Korean, Spanish and American Sign Language.