Anna Hagenberger commutes every day from Ocean View to Port Warwick. “The traffic is not that bad,” she insists, “except in the summer.” Hagenberger’s whole career as a registered vascular technologist (nine years) has been on the Virginia Peninsula. She graduated from Sentara’s College of Health Sciences in the Greenbrier area of Chesapeake. The two-year curriculum is more intense than at the average college. There were four specialties in non-invasive vascular imaging, and she chose cardiovascular. Her prerequisites of mathematics and general sciences were completed at Tidewater Community College. 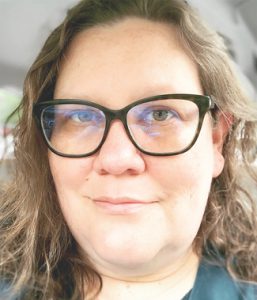 Hagenberger, who works at Sentara Vascular Specialists, performs tests prior to surgery which give the surgeon important information. “Obviously, knowing what is inside the body prior to an incision is invaluable,” she says. There are more than 30 different vascular studies possible at different places in the body. All use the same equipment. She is qualified to perform 21 of them.

Diagnoses can be difficult. “It is always helpful to rule out possible problems,” Hagenberger says. These problems include blood clots, cellulitis, compromised blood flow (arteries or veins) and certain illnesses. Hagenberger does not diagnose but gathers information.

“I like meeting new people,” Hagenberger says. “I enjoy hearing their stories. After all, they are a ‘captive audience.’” “I do have some regulars,” she adds. “Certain illnesses require repeat tests at specific intervals.”

Tests are not always definitive. “Results can be difficult to interpret,” Hagenberger says. The sound waves travel better through liquids and cannot “see” bowel gas. Swelling in the abdomen or extremities can interfere with test results and make them inconclusive. However, they can be better than an MRI or CT scan, whose results are not immediate.

There are 21 different procedures that can be performed with the same equipment. Hagenberger is currently qualified for 12 of them. Most tests are done to look for blood clots or aneurysms. Fortunately, 80 percent of the time the results are negative. “I once found a 20-centimeter aortic aneurysm. Ten centimeters is considered serious.”

“Tests are not routine and can be challenging,” Hagenberger says. “The structure of the arm or leg can vary from person to person. Major veins can be in an abnormal location. In varicose veins the arteries can create a new pathway around the blocked veins. The human body is amazing.

“The medical field has always fascinated me,” Hagenberger says. I broke my arm when I was nine years old. “I found the X-ray equipment so intriguing that I wasn’t upset. My interest in the medical field began there.”

Hagenberger has been married for 19 years. She has two girls, 16 and 13, and two German Shepherds. “I enjoy cooking,” she says. “I like to watch cooking shows on public television. I don’t watch much other TV; I would rather read,” she adds.

Hagenberger hopes to travel to the Caribbean one day. “My daughter is interested in Japanese art and I would like to take her to Japan,” she says. “My husband is retired Navy and we were able to camp in a military facility on the slope of Mount Kilauea. That was quite an adventure and I probably won’t do that again!”

Hagenberger works an eight-hour day. “I am usually pretty busy,” she says. She works one weekend every six months and is sometimes called in overnight. She must also be available for emergencies. “Every day is different,” she says.

About Nancy P. Sykes 87 Articles
Nancy was a devoted writer and friend of Oyster Pointer for more than 25 years. She wrote more than 250 features during those years. She always said she met some fascinating people during her many interviews. Her sparkling personality and joyful conversations could be felt in her writing. Nancy will be greatly missed by all who knew her, especially her Oyster Pointer family.