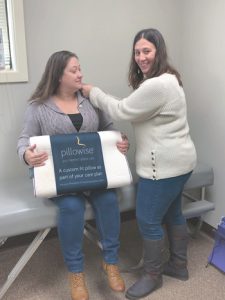 Chiropractic doctor Elizabeth Skorupa (i.e., Dr. Beth), owner of Back in Action Chiropractic, located on Canon Boulevard near City Center, is all about the business of helping people get in motion and stay in motion. Even the name of her practice, Back in Action, echoes this sentiment as it communicates the dual message of a return to health to ensure ongoing movement and exercise.

Back in Action has been in business since 1997 in multiple locations, but the current Oyster Point location is the best yet because, as Skorupa says, “I’m close to everything I need. A lot of folks in City Center pop in during a work break for a quick visit, in and out, unlike most doctors’ office visits.”

Skorupa’s office hours are fairly flexible and, because everything she does in her life is close in proximity, she is often able to accommodate last-minute appointment requests.

Dr. Beth got into the chiropractic business because she had migraines during her college years and developed an ulcer from taking too many NSAIDs. “None of us want to take care of our responsibilities if we don’t feel well,” says Skorupa. “You can’t take pills all the time, and a lot of folks live in the world between non-surgical ailments and too much pain to manage on their own.” These are the people Dr. Beth seeks to serve. “I want you doing your stuff every day—whatever you like and enjoy doing. I want to get you moving, exercising and minimizing future issues,” says Skorupa.

The most fulfilling part of chiropractic care, says Skorupa, is being “hands on” and making a difference in people’s daily lives. “The best part of what I do is making people feel better. I watch them walk in, feeling not so great and see them leave, feeling better. They limp in and leap out. Results are immediate,” Skorupa says.

One of the best facets of Dr. Beth’s chiropractic practice, apart from healing, is the fact that each client has the opportunity to develop a personal connection with Dr. Beth. “We don’t shuffle you around between therapists; you come in, you see me, and you get my full attention,” she says.

For Skorupa, seeing the positive results of what she does is the greatest reward and sometimes that reward, based on testimonials, is quite substantial. Several years ago, she worked with a female patient who was experiencing significant lower back pain. In the course of treatment, Dr. Beth discovered the patient had been trying to conceive for six years and had, to date, been unsuccessful. Not long after her treatment, she got pregnant. According to the patient, the only thing she did differently, to that point? Chiropractic care. Maybe it was just the “medicine” she needed.

When she’s not in the office, Dr. Beth enjoys spending time at the beach and teaching her daughters to play golf with her. Whether in the office or out, working with patients or not, for Dr. Beth, it’s always about the body in motion.

About Terilyn Goins, Ph.D. 55 Articles
Dr. Terilyn J. Goins is a motivational speaker/vocalist, trainer and coach. She offers a wide variety of training and motivational music programs. Goins creates programs that educate, inspire and challenge participants. Visit www.terilyngoins.com or reach her at 757-303-7807 or by email at terilyngoins@cox.net.