Budapest, Hungary, was a bucket list trip of mine for many years. Although I had cruised the beautiful Blue Danube River several times, I had never made it to Budapest. I had heard about this fascinating city and felt I really needed to visit all of Eastern Europe. Thus, I added it to my travel list!

Budapest is the capital and largest city of Hungary. It is one of the largest cities in the European Union and is recognized as a political, cultural, commercial, industrial and transportation center. Buda and Pest were once two cities; however, in 1873, it became a single city, occupying both banks of the river Danube with Buda on the west bank, Pest on the east bank and the magnificent Chain Bridge connecting the two sides.

In 2017, I had the opportunity to take a river cruise that started in Prague, Czech Republic, and ended in Budapest, where we spent two glorious days exploring the two sides of this fascinating city.

On the Pest side, we visited the beautiful St. Stephen’s Basilica, the largest church in Budapest holding up to 8,500 people; Heroes’ Square, noted for its iconic statues; the Jewish Quarter, where streets were filled with a mix of happy locals and curious tourists; the neo-gothic Hungarian Parliament, with its many historic features; and the Covered Market, where you could purchase food, wine, clothing, souvenirs — a shoppers paradise!

On the Buda side, we visited the Budapest Castle, an historical castle and massive Baroque palace complex of the Hungarian kings in Budapest and Fisherman’s Bastion, world famous for its turrets and spires, where locals and tourists come to enjoy the city views. Next, we saw the Hospital in the Rocks Nuclear Bunker Museum, created in the caverns under Buda Castle in the 1930s in preparation for the Second World War, one of the most unique and fascinating attractions of Budapest. I knew right away I wanted to visit this city again. 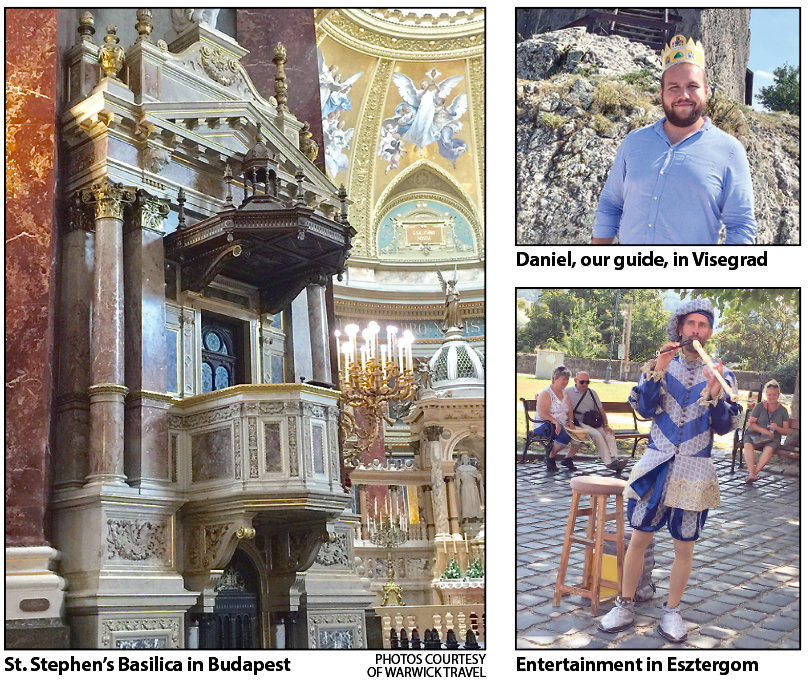 In 2018, I returned to Budapest with a group of Warwick Travelers who had never traveled to Eastern Europe. We spent three glorious nights there. I hired Daniel, a local guide, who took us outside the city on a full-day Danube Bend Tour, a most scenic stretch of the Danube River, where we visited three quaint and very interesting villages — Esztergom, Visegrad and Szentendre.

Esztergom’s massive basilica, sitting high above the town and Danube River, is an incredible sight. This picturesque town is packed with historic attractions.

Visegrád is a small castle town in Pest County. It is north of Budapest on the right bank of the Danube in the Danube Bend and is famous for the remains of the Early Renaissance summer palace of King Matthias Corvinus of Hungary and the medieval citadel. While in Visegrad, Daniel had made lunch reservations at the Renaissance Restaurant, and we enjoyed a fabulous medieval feast served by a friendly costumed staff representing a true renaissance atmosphere. We were each given a gold crown to wear during our meal. What great memories!

Szentendre is known for its baroque architecture, churches, colorful houses and narrow, cobbled streets. The main square and the alleyways around it were lined with art galleries, museums and shops. This may have been our favorite, especially for the shopping!

The next two days were filled with visiting the historic sites on both sides of the city, Buda and Pest.

One evening, Daniel took us on a Danube River Hungarian Dinner Cruise, one of our highlights as we viewed beautiful Budapest at night.
It was such a pleasure to have him join us.

Budapest, another bucket list trip crossed off my list! And yes, I do hope to return, as it is the Pearl of the Danube!