River Cruising in Europe is as popular now as ever. There are more destinations, choices and levels of activities that appeal to all ages.

In August, a group of Warwick Travelers cruised on the lower Danube River, visiting the Eastern European countries of Hungary, Slovenia, Croatia, Serbia, Bulgaria and Romania. What a fascinating and humbling experience we encountered! What a history lesson we experienced!

Our cruise began in the beautiful city of Budapest, capital of Hungary, which spans the Danube, with Buda on the west bank and Pest on the east.

Our group flew in a day early and enjoyed a private Danube Bend tour, visiting the charming villages of Esztergom, Visegrad and Szentendre located northwest of Budapest. One of our highlights was a Hungarian dinner cruise along the Danube, viewing twinkling Budapest at night. 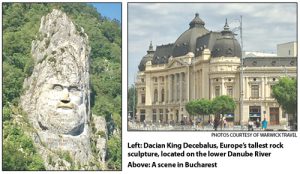 While in Budapest, we enjoyed the architectural grandeur of the city. Our exclusive welcome cocktail reception and dinner with music at the Baroque-style Festetics Palace will forever remain in our memories.

Upon boarding our riverboat, we settled into our staterooms, enjoyed dinner and cruised to the ancient city of Pecs, Hungary, located on the slopes of the Mecsek Mountains. In the morning, we took a guided walking tour, exploring the spectacular city.

Our next port took us to the Baroque city of Vukovar, Croatia. Following a lecture on board providing history of this war-torn country, we took a guided walk through the city, once a lovely town with baroque architecture, where we saw the remaining devastation from the violent conflict of the Croatian War of Independence fought 1991–1995.

Boarding coaches, we rode through the countryside to the Baranya region where we were invited into the homes of friendly locals who shared their life story during those violent years. It was a devastating time for them and an emotional visit for us. We left thinking that while this was happening here, we were living the good life in America.

The next morning, we arrived in the cosmopolitan capital of Belgrade, Serbia. We began the day with a lecture by a local expert about the country, followed by a fascinating walking tour of the city where we saw the mausoleum of Josip Broz Tito, president of the Socialist Federal Republic of Yugoslavia.

That evening we visited the Royal Palace of Belgrade, built in the 1920’s for the Yugoslavian royal family, and attended a private reception and dinner at the White Palace, also located in the royal family compound.

The next day, we relaxed while cruising the Danube River through the scenic heartland of Eastern Europe. We passed into Romania, cruising through the Kazan Narrows and the Iron Gates of the Danube, an 80-mile-long gorge carved by the mighty Danube between the Balkan and Carpathian mountain ranges. As we glided along the Romanian/Serbian border, we passed a massive monument dedicated to the second century Dacian King Decebalus—Europe’s tallest rock sculpture, completed in 2004 and carved into the riverbank on the Romanian side. Later, we cruised through the largest double lock on the Danube.

We spent the next morning cruising through the scenic countryside of Bulgaria prior to our arrival in Ruse, often referred to as “Little Vienna” for its art nouveau homes and lively cafes. Here, we saw the impressive 13th century Ivanovo Rock Church, a historic monastery carved of solid rock and known for its medieval frescoes, a UNESCO World Heritage site.

Our next port city was to be Constanta, Romania; however, due to the low depth of the Danube, we were unable to continue cruising, so we stopped in Fetesti and motorcoached to Constanta where we had a wonderful day relaxing and testing the waters of the Black Sea.

The next morning, we boarded coaches for Bucharest, Romania’s capital and largest city. Our visit to Old Town offered cobblestone streets, reflecting a variety of architectural style buildings including baroque, neoclassical and art nouveau.

That evening was a private tour of the Palace of the Parliament, the second largest administrative building in the world after the Pentagon. We enjoyed a special farewell dinner at the palace along with musical entertainment—another memorable occasion.

While visiting these former communist countries, I found this part of the world to be stimulating and very educational. The more I travel, the more I learn—not always through books but up close and personal.

If this part of the world interests you, call your travel advisor for more information as these river cruises sell out quickly.