Kameera James and her two young sons are getting ready to move into a new house.

“You can’t imagine how excited she is,” says Virginia Staley, director of events and development for Habitat for Humanity Peninsula and Greater Williamsburg. “Her smile goes from ear to ear.”

James, a pipefitter at Newport News Shipbuilding, is a first-time homeowner. She and her two boys, Paul and Premier, will be moving into a two-story 1,200-square foot house in the East End on property donated by Newport News Redevelopment and Housing Authority. Every year, Habitat receives about 140 applications but is only able to build between 10 and 12 homes.

Each Habitat house costs about $100,000 to build. Habitat depends on community partners to help defray the cost. James’ house is the result of five Rotary Clubs coming together and deciding to focus on making the home a reality for James and her sons.

“As Rotarians, our motto is ‘Service Above Self.’ We always keep our eyes and ears open for ways to strengthen the communities in which we live and work,” says Davetta Rinehart, president of the Warwick at City Center Rotary Club. “We are so excited for this young family, with whom we have worked side-by-side to help build a secure future.”

Rotarians not only fundraised for the house, but they also helped build it. They were also joined by James, who has assisted as well with the building process. Each Habitat recipient is required to contribute 300 to 400 hours of sweat equity to the project, Staley says. That way, they are invested in the effort and also learn the ins and outs of their homes. 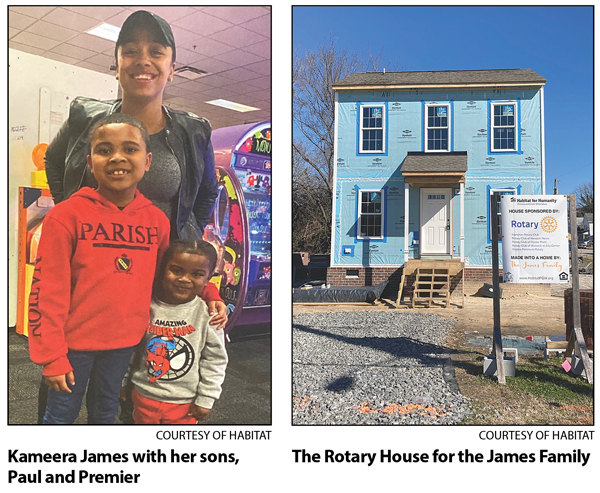 A Habitat house takes about four to six months to construct. Over the years, there have been 85 Habitat homes built in Newport News, with two, including James’s, under construction. Habitat also builds homes in Williamsburg, Hampton, York, James City, Charles City and New Kent counties. Rotary was the perfect partner because its members tend to be community-minded and well-connected, Staley says.

“People in Rotary have so many contacts,” Staley says. The hope was that Rotary would use its vast network to spread the world about the Habitat house. It worked.

Fundraising for the house was key, she says. Rotary and Habitat used all sorts of creative ways to raise money. One such way was having people pay for one square foot of the home, which came to $83.33. A grid of the house was created on paper, and squares were colored in as they were sold. T-shirts were sold, as were tickets to a sip and shop event at Habitat’s ReStore.

Rotarians were completely supportive of the effort, Staley says.

“They have been with us every step of the way,” she says. “We have all worked very closely together. They are all about community and helping our community. It’s been the perfect partnership.”

James and her sons will move into their new home this summer. The mortgage will be paid by James to Habitat, with much of that money invested in new Habitat houses. Habitat owners take great care of their homes, which tend to stand out as well cared for and neat. The level of pride the new owners have in their homes is extremely high.

About Kelli Caplan 71 Articles
Kelli Caplan is mother of three children and a friend to all who know her. She use to spend a lot of time in her SUV, driving to schools and pediatricians, but her children have graduated from high schools. Now she can be found at WalMart and Harris Teeter, playing pickleball or cycling. She loves to try new recipes and new authors’ books. Her favorite foods are green (lettuce, broccoli, pickles). A former crime reporter for the Daily Press, Kelli has been writing for Oyster Pointer as long as she has been able to hold a pencil.