Dana Lynn, REALTOR® has affiliated with Berkshire Hathaway HomeServices Towne Realty in the Newport News sales office. Lynn has an associate degree in social science from Thomas Nelson Community College. She will specialize in residential sales.

Virginia Living Museum’s temporary exhibit, Exploration Ice Age: Unearthing Extinctions, will continue through April 11. This exhibit showcases mammoths, saber-tooth cats, mastodons and other animals of the last Ice Age. It includes fossils and biofacts from the Virginia Living Museum collections and some on loan from the Virginia Zoo. An interactive fossil discovery quest includes a digital breakout room via QR code. With a quick scan on a mobile device, guests select a fossil on display and attempt to travel back in time to the last Ice Age and solve clues to discover its identity. The exhibit is made possible through sponsors W. M. Jordan Company and TowneBank. 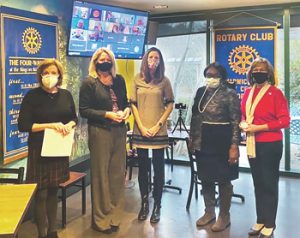 The Warwick at City Center Rotary Club celebrated its 76th anniversary with Jim Probsdorfer, past president and club historian presenting a brief overview of the club’s history of doing good in the world. He included in his presentation the first service project of purchasing band uniforms for Warwick High School in 1945 and the founding of the Virginia Living Museum (jointly with the Junior League) in 1966. Judy Cocherelle, district governor, inducted two new members: Heather Jones, realtor with Liz Moore & Associates (sponsored by Sarah Browning) and Yvette Chase-Batts, a consultant with Mary Kay (sponsored by Sharon Martin). Shown here (left to right) are Anne Wozniak, membership chair, Browning, Jones, Chase-Batts and Sharon Martin, club president.

Alex Hill has joined Criner Remodeling as project manager. Hill attended James Madison University and is a skilled carpenter, with 14 years experience in the custom home building industry. He has transitioned to home remodeling, including full porch sunroom projects, deck and window replacement. He will be managing projects that include bathroom and kitchen remodels as well as exterior deck/porch work. 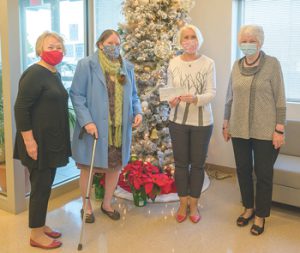 The ACBL Charity Foundation donated $3,500 each to Virginia Peninsula Foodbank and the Food Bank of Southeastern Virginia and the Eastern Shore. Overall, seven Food Banks benefited from a $30,000 donation given to food banks in the District 6 area covering Virginia, Washington, D.C., and Maryland. Pictured from left are Karen Crowley, president of Unit 110; Barbara Duer, president of Unit 146; Donna Tighe, director of development, Virginia Peninsula Foodbank; and Kay Hughes, District 6 secretary. 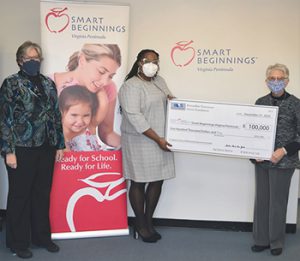 Smart Beginnings Virginia Peninsula (SBVP) has received a $100,000 grant from the Bernadine Franciscan Sisters Foundation, Inc. (BFS) to help grow its mission and vision. One of the largest private grants in the organization’s 15-year history, this gift to SBVP enhances its approach to high-quality early learning opportunities and healthier outcomes for children and their families. SBVP is the premier advocate for families in this community. Sister David Ann Niski, BSF’s executive director, emphasized the gift was awarded to not only contribute money, but also to invest in an organization that brings together parents, children, childcare providers and the community to set children on an educational path leading them to becoming productive members of their communities. Shown here at the presentation (from left to right) are Diane Umstead, SBVP executive director; Chenequa Hayden, board chairwoman, Smart Beginnings Virginia Peninsula; and Niski.

Richard Tisdale has joined Liz Moore & Associates as its new technology engagement manager. Tisdale, who has designed and hosted many of the region’s most successful websites for the past 23 years, has joined the firm with a singular focus of helping agents and staff reach their technology potential. In his new role, Tisdale will work directly with agents to train and coach on technology platforms.