Dr. Eric Darby and his team at Tidewater Physicians Multispecialty Group Urology have been designated as a Center of Excellence for GreenLight™ Laser Therapy treatment , a minimally invasive outpatient procedure for men looking to treat their benign prostatic hyperplasia (BPH). GreenLight Therapy can help provide immediate relief from enlarged prostate symptoms. In addition, the therapy requires no incisions and typically has no overall deleterious impact on sexual function. The Center of Excellence designation recognizes Dr. Darby’s high degree of experience with GreenLight™ Laser Therapy and commitment to delivering effective, long-lasting therapy for BPH, a condition in which a man’s prostate enlarges and squeezes the urethra, causing frustrating symptoms, such as frequent or urgent urination, a weak or interrupted urine stream and the need to get up several times a night to urinate. It affects about 50 percent of men by age 60, and up to 90 percent of men by age 85.

Christina E. James, Esq. has joined the law practice of Krinick, Segall, Moore & Lawrence as an associate. A native Virginian, James earned a bachelor’s degree in political science from Yale University and graduated from the Marshall Wythe School of Law of the College of William and Mary. She began clerking for the chief judge of the Norfolk Circuit Court and after working for the Public Defender’s Office in Norfolk, was an Assistant Commonwealth’s Attorney in Hampton for five years. She has been in private practice since 2008, representing clients in the state and federal courts of Virginia.

Kim Kutner, Riverside Health System nursing home administrator, dementia educator and director of community ventures for Riverside Center for Excellence in Ageing and Lifelong Health (CEALH), has been appointed a member of the Alzheimer’s Disease and Related Disorders Commission for Virginia. Appointed by the Virginia Senate Committee on Rules, Kutner will serve a four-year term. 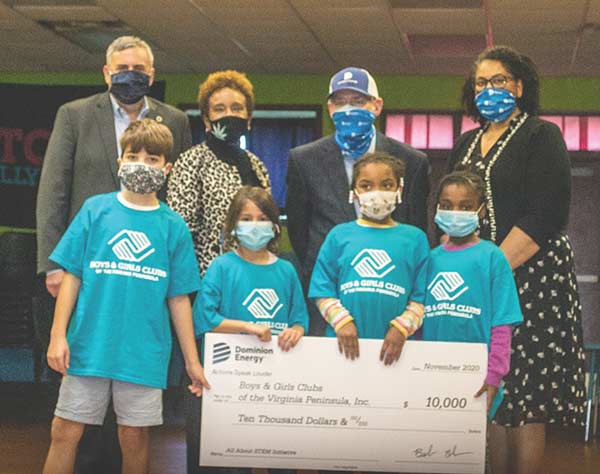 Dominion Energy and its charitable foundation donated another $10,000 to help the Boys & Girls Clubs of the Virginia Peninsula. The grant expands its All About STEM Initiative to promote science, technology, engineering and math among traditionally underserved groups. The club gives students a safe place with state-of-the art resources to go to school virtually and to get needed support. Exposure to STEM education is critical during the tween years to drive interest, close achievement gaps and build capacity for success in these future career opportunities. Shown here are Dominion Energy staff members presenting donation to Hal Smith, president and CEO of Boys & Girls Clubs of the Virginia Peninsula (left), along with club members at Greater Hampton Roads Unit.

Regina Scott, REALTOR® and supervising broker with Berkshire Hathaway HomeServices Towne Realty, has been appointed to a two-year term on the board of directors of the Virginia Peninsula Association of REALTORS®. The association consists of more than 1,100 REALTOR® members.

Chantel West, REALTOR®, has affiliated with Berkshire Hathaway HomeServices Towne Realty in its Newport News sales office. A native from Hampton, West has more than 15 years of customer service experience. She can be reached at 202-660-8928.

Tiffany Boyle has been appointed by the Virginia Senate Committee on Rules to serve on the Virginia Minority Business Committee. She has been serving as Newport News Commissioner of the Revenue since January 1, 2018. Boyle has a background in both the public and private sector and is highly educated with an extensive mix of experiences amassing her ability to understand business and organizational development from multiple perspectives.

Trevor Grimm has joined Newport News Tourism as its new web and social media marketing coordinator. He will be responsible for implementing web-based marketing strategies to promote public awareness of and increase visitation to Newport News. A native of Newport News and graduate of Denbigh High School, Grimm earned a degree in marketing and a minor in music industry at James Madison University. He worked as a digital marketing specialist with Richmond Ford, a marketing coordinator at Busch Gardens and in various other tourism industry positions including Water Country USA and Great Wolf Lodge. 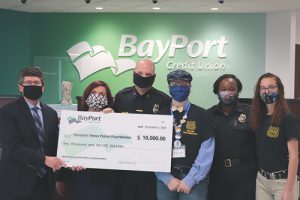 BayPort Credit Union donated $10,000 to sponsor the Newport News Police Department’s (NNPD) Young Adult Police Commission (YAPC). The charitable contribution was made through the Newport News Police Foundation and will be used to further develop the YAPC program and expand current offerings. YAPC was established in 2018 to offer positive engagement and learning opportunities between the NNPD and youth in the city. BayPort Credit Union President/CEO Jim Mears (left) presented the check to Amanda Wroten, executive director of the Newport News Police Foundation (second from left). Newport News Police Chief Steve Drew, Lt. Melissa Morgan with the department’s Community and Youth Outreach Division, as well as Young Adult Police Commissioners Olivia Horvath and Lavender Oman were on hand to help accept the gift.

The Rotary Club of Warwick at City Center recognized several members for their contributions to The Rotary Foundation, which over the past 100 years has spent $3 billion on life-changing, sustainable projects around the world. Anne Wozniak was recognized as first-time Paul Harris Fellow for her contribution of $1,000 to the Foundation. Kevin O’Connell was recognized as a Paul Harris Fellow + 3 for his ongoing commitment to the foundation. 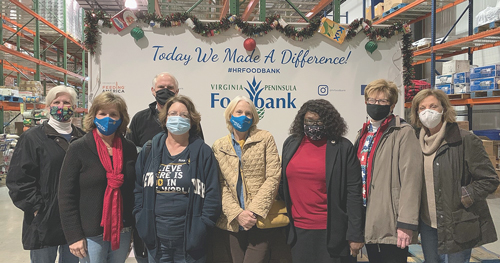 As People of Action, club members volunteered to pack food at the Virginia Peninsula Foodbank, helping to ensure families have the food they need during this difficult time. Participating in the food packing are (left to right) Priscilla Bele, Martin, Allen Kemp, Leslie Borwick, Roberta Thayer-Smith, Yvette Chase, Judi Hines and Wozniak. 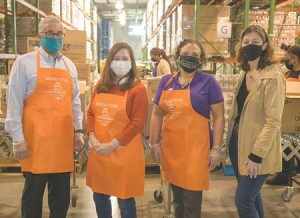 Governor Ralph Northam, his cabinet and federal, state and local legislators volunteered at food banks across Virginia in November to bring awareness to the issue of food insecurity and to feature the work of food banks and their partner agencies. Virginia Peninsula Foodbank hosted Dr. Janice Underwood, Virginia’s chief diversity, equity and inclusion officer (second from right), and members of her staff. Several other elected officials joined Dr. Underwood in volunteering at the Foodbank, including (from left) Congressman Bobby Scott, Delegate Shelly Simonds and Congresswoman Elaine Luria. 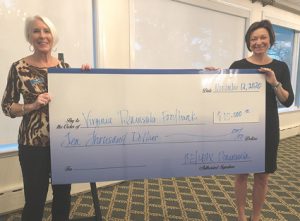 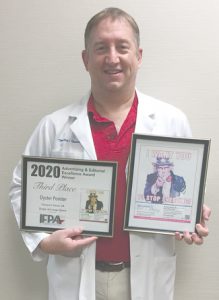 Virginia Health Services (VHS) is being profiled in two new ads launched by the American Health Care Association and National Center for Assisted Living (AHCA/NCAL), the nation’s largest association of long-term and post-acute care providers. The ads, “Family” and “Oath,” feature a diverse group of caregivers from multiple (VHS) communities along with nursing and physical therapy staff. The group discusses how long-term care staff have steadfastly protected and cared for nursing home and assisted living residents under very challenging circumstances. Mark Klyczek is VHS president and CEO.

Joycelyn Spight Roache, CRC, has been recognized as a recipient of the 2020 Inside Business Women in Business Achievement Award. Roache is vice president/relationship manager and lead underwriter at Old Point National Bank. In addition, she currently serves on the boards of directors of United Way of the Virginia Peninsula, Versability Resources and is on the state board of directors of the Virginia Center for Inclusive Communities.