Robert Criner, CAPS, CGP, GMR, president of Criner Remodeling, has been inducted into the National Remodeling Hall of Fame by the National Association of Home Builders (NAHB) for his contributions to the industry. Criner has been an NAHB member and a National Association of Home Builders Remodelers member for 39 years. He became the nation’s first Certified Graduate Remodeler in 1989 and the first Graduate Master Remodeler in 2008. He was instrumental in government regulations that affect remodelers and repeatedly represented the industry at the Environmental Protection Agency, the Department of Justice, the Small Business Administration and the Office of Management and Budget. In 2013, Criner was named NAHB Remodeler of the Year. He served on the Certified Graduate Remodeler Board of Governors and earned the Certified Graduate Builder, Certified Green Professional and Certified Aging-in-Place Specialist designations from NAHB. Locally, Criner has served on the board of directors of the Peninsula Home Builders Association and Remodelers Council and has volunteered and held leadership positions with American Red Cross, York County Board of Zoning Appeals, York County Board of Building Appeals, York County Planning Commission, Peninsula Habitat for Humanity Advisory Board, New Horizons Educational Foundation and Newport News Education Foundation.

Randall A. “Randy” Gilliland has been hired jointly by Newport News Education Foundation (NNEF) and Newport News Public Schools (NNPS) to serve as director of the foundation, and corporate partnership liaison for NNPS. In this capacity, Gilliland will support both the school division and NNEF by building corporate partnerships and raising funds to enhance the mission of ensuring all students graduate college, career and citizen ready. Gilliland has served as president of the Support Teachers Foundation; a consultant for Med Serve, a non-profit medical service; founder and managing member of Sustainable Impact, a political, non-profit consulting firm; and founder and president of Gilliland and Company, a national political fundraising firm. 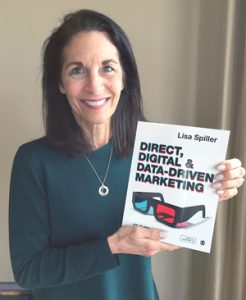 Alexis Swann, commercial lender, has joined TowneBank’s Oyster Point office as executive vice president. She has 27 years of experience in the industry. Swann was a 2019 Humanitarian Award Recipient for the Virginia Center for Inclusive Communities. She serves on the State boards for the Jamestown Yorktown Foundation, Inc. and Virginia Center for Inclusive Communities. Locally, she serves on the boards for Fear 2 Freedom and The Hampton Delta Foundation, Inc. Swann was recently appointed to the board of visitors of Virginia Commonwealth University. She also has served terms as a board member for the Greater Peninsula Habitat for Humanity, Newport News Police Foundation and Christopher Newport University’s Luter School of Business.

N. Scott Millar has been promoted to senior vice president and general manager of corporate human resources, corporate audit, ethics and business consultation and Canon Solutions America, Inc. human resources with Canon U.S.A. With an extensive and diverse background in developing human capital strategies and leading HR initiatives for the corporate and manufacturing business divisions, Millar’s HR responsibilities will now extend Canon Solutions America’s direct sales business. He will continue to be involved with talent acquisition, talent and leadership development, total rewards, employee engagement and HR operations and support for Canon U.S.A. and Canon Solutions America. In addition, Millar will continue leading the corporate audit, ethics and business consultation division, overseeing activities relating to standards of conduct, corporate policies and procedures, compliance with applicable laws and promoting ethical relationships across Canon Americas. Millar initially joined Canon Virginia, Inc. in 1992, where he served as the senior director of human resources for Canon Virginia, the company’s flagship operation for manufacturing, engineering and technical support in the Americas. He is a 1985 honors graduate of Christopher Newport University (CNU) and recently served as university rector and a member of the CNU Board of Visitors.

Lionsbridge Football Club (FC) was recently named the 2019 Franchise of the Year by USL League Two, the top pre-professional men’s soccer league in North America. Lionsbridge was selected from 74 clubs across the United States and Canada. Founded in 2018, Lionsbridge FC is comprised of top locally based collegiate and international players. Home games are played on the campus of Christopher Newport University, and a two-hour community festival precedes every game.

Drucker + Falk completed a major green initiative to reduce its carbon footprint. The company installed 586 solar panels, 385W each, on the roof of its headquarters located at City Center. The 225.6 kw system should produce 280,000 kWh annually, which is enough electricity to offset 100 percent of its Virginia office headquarters’ requirements. The system will offset 309,680 carbon emissions per year, which is equivalent to planting 1,611 trees a year and the same amount of energy produced by 45 tons of coal a year.

New member Amber Lempke was inducted into the club. Lempke and her family recently relocated from the Washington, D.C., area. She serves as senior vice president in talent management for ITA International. Pictured at the induction ceremony are (from left) Bele; Lempke; Jennifer Dakis, sponsor; and Anne Wozniak, membership chair.

Cushman & Wakefield | Thalhimer announced the sale of 812 City Center Blvd. within Oyster Point Park. Extreme Restorations purchased the 15,118-square-foot-office/warehouse building situated on 1.37 acres from Chesterfield Properties LLC for their new office location. Kenneth D. Penrose, Jr. of Cushman & Wakefield | Thalhimer handled the sale negotiations on behalf of the seller. The real estate company has been selected by Bayport Credit Union to provide exclusive commercial management and leasing services for 2 Bayport Way, a three-story, 56,400-square-foot class A office building, which will feature BayPort Credit Union as the lead occupier. The first floor of the building is available for lease. Teresa Nettles, senior vice president, is the exclusive leasing representative, and Jeri Powell is the portfolio manager assigned to the property.

Virginia Living Museum (VLM) is currently exhibiting Tiny Titans: Dinosaur Eggs and Babies, the first in a series about dinosaurs. This traveling exhibit extends to May 3. One companion program, running every Saturday through May 2, is
A Family of Titans, a live animal program. A second companion program, Zula Patrol: Down to Earth, is being shown in the Abbitt Planetarium. On May 23, running through September 7, the museum will debut Jurassic Giants, featuring the Giganotosaurus, the largest dinosaur ever to be displayed at VLM, and bringing animatronic creatures of the Triassic, Jurassic and Cretaceous periods for summer 2020. For additional information on program times and specifics, visit thevlm.org or call 757-595-1900.

As part of Mariners’ Museum’s lecture series on March 4, bestselling author David Haward Bain will share the fascinating tale about two Virginians and an American exploring expedition to the Holy Land in 1848 in Bitter Waters: America’s Forgotten Naval Mission to the Dead Sea. On April 9, Tucker Thompson, TV commentator, producer and America’s Cup host will talk about America Cup’s new class of boat — AC75 and its foiling mono-hulls — in Chasing the Cup: An America’s Cup Update Featuring American Magic. On May 7, Robert N. Macomber, an award-winning author and internationally acclaimed lecturer, will provide fascinating insight into the Caribbean’s role in the American Civil War. Museum doors open at 6 p.m. and lectures begin at 7 p.m. Tickets are free for museum members. For additional information, visit MarinersMuseum.org/Membership.

The Coastal VA Team with RE/MAX Peninsula has qualified for the prestigious RE/MAX Titan Club Award, honoring agents who have earned a certain level of business in the past year. Created in 2015, the award was presented to less than one percent of active RE/MAX agents in 2019. Team leader Shannon Edwards has served as a real estate agent for 15 years and has extensive experience in residential sales and property management. Among Edward’s list of achievements, her team has earned a Virginia Peninsula Association of Realtors Team of the Year Award and consecutively received the highest levels of Outstanding Sales Club awards.

Virginia Technical Academy, a performance-based trade school, will begin classes on March 25. Day and evening classes will be available in HVAC, electrical, appliance repair, facility maintenance, plumbing and light commercial refrigeration. The academy’s goal is to ensure each student is work-force ready with a nationally recognized certification. For additional information, visit www.vtacademy.com or call 757-651-1007. 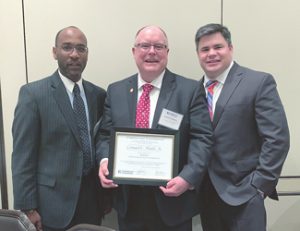 Len Heath, a partner in the law firm of Heath, Overbey, Verser & Old, PLC, was inducted as a Fellow into the Virginia Law Foundation in January during the annual meeting of the Virginia Bar Association. Membership is limited to less than one percent of all attorneys in Virginia. Pictured with Heath (center) are partners Shawn Overbey (left) and Joe Verser.

SOLitude Lake Management experienced another successful year in the history of the company’s dedicated volunteering and community outreach program, The SOLution. The SOLution fosters SOLitude’s core company values by encouraging and rewarding volunteerism, activism, outreach and fundraising. Since the program was established in 2012, SOLitude’s employees, partners and its families have generated more than 16,877 volunteer hours and donated $518,855 to charitable organizations and causes throughout the country.

Recipients of the 52nd annual Peninsula Humanitarian Awards were honored in February for their significant contributions to the promotion of respect and understanding among people of diverse racial, ethnic and religious backgrounds in the Peninsula community. The honorees were Carlton S. Ashby, a lifelong educator who currently serves as a primary enrichment teacher for the Young Achievers Academy at Sixth Mount Zion Baptist Temple; Reverend George Chioros, parish priest at Saints Constantine and Helen Greek Orthodox Church; Janet V. Green, CEO of Habitat for Humanity, a nonprofit organization that helps people build or improve a place they can call home; Mike Petters, president and CEO of Huntington Ingalls Industries, and Nancy Petters, president of the board of directors at Downtown Hampton Child Development Center; Valerie Scott Price, retired teacher of 30 years who worked with the Newport News Public School System before starting The GET UP Project to educate parents in preparing their children for kindergarten; and Peninsula READS, a community-based adult literacy program that provides one-on-one instruction in the areas of reading, writing and math, as well as small group instruction in English for speakers of other languages, provided by trained volunteers.

TPMG Lung and Sleep Specialists in Newport News has expanded its practice with the addition of Agnieszka E. Petersen, MD, and the opening of its new location at 11848 Rock Landing Drive, Suite 402. Peterson will be joining Subramanian Malaisamy, MD, MRCP, Amit D. Patel, MD, FCCP, Anil Patel, MD, and Sabrina Brown, MSN, FNP-C. Having practiced in the Virginia Beach area for many years, Petersen is board certified in pulmonology, critical care and internal medicine. She earned her medical degree from the Medical University of Gdansk in Gdansk, Poland, and completed her internal medicine residency and fellowship in pulmonary medicine at Yale University Bridgeport Hospital in Connecticut. With dual training in pulmonary and critical care medicine, Petersen has extensive experience managing intensive care units, as well as expertise in respiratory failure and life-saving interventions. She specializes in the treatment and management of disorders of the respiratory system, including the lungs, upper airways, thoracic cavity and chest wall. She diagnoses and treats patients who suffer from lung diseases including asthma, chronic obstructive lung disease (COPD), emphysema, lung cancer and interstitial and occupational lung diseases.