The Black Child Development Institute (BCDI)-Hampton Roads, an affiliate of the National Black Child Development Institute, received a $5,000 grant from Alfred Street Baptist Church in Alexandria, Va. The grant will assist BCDI with programming to support families during this COVID season. It will also support operational assistance to include purchasing books for children to improve literacy in the home. Chartered in April, 2016, BCDI-Hampton Roads has been instrumental in giving more than 8,000 books to parents for their children. It has conducted parent workshops and forums that help strengthen Black families. For additional information on BCDI-Hampton Roads membership and programs, contact Darlene Walker, president at 757-532-4369 or email at hamptonroads@affiliates.nbcdi.org.

Pincus Construction has passed the National Association of State Contractors Accreditation Exam for Commercial General Contractors, allowing the company to expand its abilities to operate beyond its current reach. A full-service, bonded commercial contractor and construction management company, Pincus Construction is licensed to operate in more than 25 states throughout the United States. The company was founded in 2007. Michael Pincus is company president. 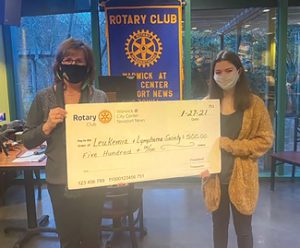 Hannah Dye and Owen Fisher, seniors at York High School, are team leaders for their fundraising team “Soar for the Cure,” and are competing for the 2020 LLS Student of the Year Campaign, a student-led initiative to raise money and awareness for the Leukemia and Lymphoma Society. Dye and Fisher presented a program to the Warwick at City Center Rotary Club about the Leukemia and Lymphoma Society and its initiative. The club presented a check for $500 towards their efforts. Shown here at the check presentation are Sharon Martin, club president, and Dye.

Newport News Fire Department (NNFD)has been selected by the National Fire Protection Association (NFPA) to participate in the second phase of a pilot program to build a digital community risk assessment (CRA) tool. Aligned to NFPA’s Standard on Community Risk Assessment and Community Risk Reduction Plan Development, the tool, or “dashboard,” enables community leaders to gain valuable insights and make data-informed decisions around fire prevention and other risk-reduction activities in their communities. Newport News Fire Department was one of only 250 fire departments nationwide chosen to participate in this phase. The first phase of the pilot project, which included participation from 50 fire departments across the country, helped identify features of the digital dashboard that will work effectively and those that need fine-tuning. During the second phase of the program, the NNFD will provide feedback around the use of dashboard to help continue refining and enhancing the digital tool.

Effective March 31, Sonabank will be changing its name to Primis Bank, and its parent company will be changing from Southern National Bancorp of Virginia to Primis Financial Corp. The company is publicly traded on the NASDAQ and its ticker symbol will change from SONA to FRST. Customers should expect no change with their relationship managers, and all of their checks, debit and credit cards, as well as other products and services, will experience no change. Dennis J. Zember, Jr. is president and CEO of the company.

Jennifer O. David, Katherine G. Dermanis, W. Fanchon Glover, Joycelyn Spight Roache, Kevin G. Swann, and Housing Development Corporation of Hampton Roads were recipients of the 53rd annual Peninsula Humanitarian Awards presented by the Virginia Center for Inclusive Communities. David is a partner at David, Kamp & Frank, where she focuses on family law litigation. A retired Hampton City School teacher, Dermanis currently works at Gloria Dei Lutheran School. Glover is the founding chief diversity officer at the College of William & Mary. Roache is vice president, commercial relationship manager and lead underwriter at Old Point National Bank. Rev. Dr. Kevin G. Swann is senior pastor of Ivy Baptist Church, where he has served since 2006. Housing Development Corporation of Hampton Roads (HDCofHR) was formed in October 2005 and became a nonprofit in December 2006. The organization was started in order to provide quality, affordable housing opportunities to the clients of nonprofits on the Greater Virginia Peninsula and in Gloucester County. The awards honor individuals and organizations that have made significant contributions to the promotion of respect and understanding among people of diverse racial, ethnic and religious backgrounds in the Peninsula community.